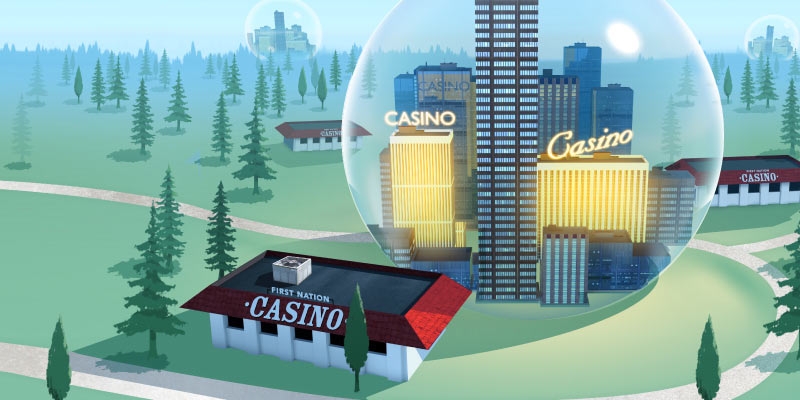 In 1985, Parliament amended the Criminal Code to give the provinces jurisdiction over gambling. The provinces have used their new jurisdiction to create cartels for their own profit, in which they are either the owners of licensed casinos or take a large share of the profit. First Nations challenged the provinces in court but lost. Hence, they have had to fit into the cartel system and take leftovers—with a few exceptions, casinos located far from the main action. Only Alberta has let them into lucrative metropolitan markets, with one casino each in Edmonton and Calgary. Saskatchewan and Manitoba have recently licensed First Nation casinos not too far from Saskatoon and Winnipeg. In Ontario, Casino Rama is in a popular resort location, and the Membertou VLT parlours are situated within the small city of Sydney, Nova Scotia.

Obviously a lot of money moves around in casinos, but does it benefit the host First Nations? The answer is an emphatic “Yes” for the half-dozen casinos located in or near cities and destination resorts. In all these cases, the opening of a casino was an inflection point in the time series of their Community Well-Being (CWB) index scores. (CWB is an aggregate of income, employment, education, and housing data collected by Statistics Canada.) Their scores rose more rapidly than their previous rate of progress because large profits from the casino can be used to provide better housing and other social services for First Nation members. Money from the casinos can also be leveraged for large-scale business and real-estate development, as is now happening in Edmonton and Calgary.

Elsewhere, the answer is only a qualified “Yes”. The casinos in rural locations are generally profitable and honestly run, and they do generate useful amounts of cash and jobs for the host First Nations. However, in most cases hosting a casino has no discernible effect on the Community Well-Being of the hosts. The CWB scores of less favourably located First Nation casinos have not risen more rapidly than the general rate of improvement for First Nations because the revenues generated from their remote locations are not large enough to have a transformative effect.

British Columbia and Manitoba plan to follow Ontario in giving First Nations a larger percentage of all gambling revenue in the province. Other analysts suggest allowing First Nations to keep a greater share of what they generate in their casinos. Without denying the merit of these suggestions, an even better policy would be to relax cartel restrictions so that First Nations can earn more for themselves. They have demonstrated that they can operate casinos efficiently in the locations they have been allocated. It is time to take off the shackles.

One step would be to allow more First Nations casinos into profitable big-city markets. That might mean that some First Nations would operate casinos in multiple locations off their present Indian reserves. If that is seen as a problem, let them buy urban land and incorporate it into their reserves. That model is already well established in Saskatchewan and Manitoba and could easily be applied more widely.

If the provinces will not take these steps, Ottawa can nudge them by threatening to resume jurisdiction over gambling. What Parliament gave, Parliament can take back. Or Parliament could leave general jurisdiction with the provinces but assume regulatory power over First Nations casinos. The gambling ventures of Indian tribes are federally regulated in the United States, where they are far more numerous and generate far more revenue for their hosts than in Canada.

The best policy of all would be to abolish the provincial cartels. Ironically, they were created just as Canada abolished cartels and reduced over-regulation in telecommunications and air-passenger travel. Because of the large amount of money involved, gambling needs government regulation to keep out organized crime, money laundering, and profit skimming. Beyond that, gambling can operate in a free market like other entertainment industries. First Nations have shown the ability to compete, and they would be winners in such a market.