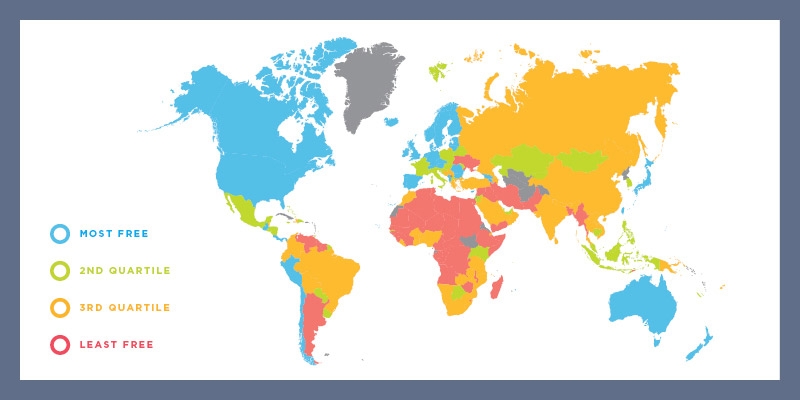 The index published in Economic Freedom of the World measures the degree to which the policies and institutions of countries are supportive of economic freedom. The cornerstones of economic freedom are personal choice, voluntary exchange, freedom to enter markets and compete, and security of the person and privately owned property. Forty-two data points are used to construct a summary index, along with a Gender Legal Rights Adjustment to measure the extent to which women have the same level of economic freedom as men. The degree of economic freedom is measured in five broad areas.

Area 2: Legal System and Property Rights
Protection of persons and their rightfully acquired property is a central element of both economic freedom and civil society. Indeed, it is the most important function of government.

Area 3: Sound Money
Inflation erodes the value of rightfully earned wages and savings. Sound money is thus essential to protect property rights. When inflation is not only high but also volatile, it becomes difficult for individuals to plan for the future and thus use economic freedom effectively.

Area 4: Freedom to Trade Internationally
Freedom to exchange—in its broadest sense, buying, selling, making contracts, and so on—is essential to economic freedom, which is reduced when freedom to exchange does not include businesses and individuals in other nations.

Gender Legal Rights Adjustment
The index published in Economic Freedom of the World now includes an adjustment for gender disparity to take into account the fact that in many nations women are not legally accorded the same level of economic freedom as men. The Gender Disparity Index and its use in making the adjustment is described in Chapter 3: Adjusting for Gender Disparity in Economic Freedom and Why It Matters, pp. 189–211 in the report of 2017.

Jurisdictions
The EFW index rates 165 jurisdictions. The data are available annually from 2000 to 2020 and for years ending in zero or five back to 1970. This dataset makes it possible for scholars to analyze the impact of both cross-country differences in economic freedom and changes in that freedom across a time frame of several decades. Separate estimates are also provided at five-year intervals back to 1950 on the economic freedom website.

Economic freedom around the world in 2020

Top-rated countries
The most recent comprehensive data available are from 2020. Hong Kong remains in the top position, though its rating fell an additional 0.28 points. Singapore, once again, comes in second. The next highest-scoring nations are Switzerland, New Zealand, Denmark, Australia, United States, Estonia, Mauritius, and Ireland.

Economic freedom continues to grow
Exhibit 1.4 shows the global average for all 123 nations with complete data since 2000. The average rating fell to 6.84 in 2020 from 7.00 in 2019—erasing about a decade’s worth of improvement in economic freedom in the world. The policy responses to the coronavirus pandemic undoubtedly contributed to an erosion of economic freedom for most people in 2020. Even after the recent decline, between 2000 and 2020 the average economic-freedom rating increased to 6.84 from 6.59.

Chapter 1: Economic Freedom of the World in 2020
The authors of the report, James Gwartney, Robert Lawson, Joshua Hall, and Ryan Murphy, provide an overview of the report and discuss why economic freedom is important.

Chapter 2: Country Data Tables
The tables in chapter 2 provide detailed historical information for the 165 jurisdictions in the index. For each jurisdiction for which data were available, the tables show the overall EFW index rating and the rank of that country for the years 1980, 1990, 2000, 2010, 2015, 2019, and 2020.

Chapter 3: Economic Freedom in the Literature: What Is It Good (Bad) For?
Robert Lawson
Scholars such as Adam Smith, David Ricardo, Ludwig von Mises, F.A. Hayek, Milton Friedman, among others, argue an economic system based on private property, competitive markets, and free trade yields good outcomes: not only prosperity but human flourishing in many dimensions. Other scholars, among them Karl Marx, J.M. Keynes, Joseph Stiglitz, argue economic freedom leads to bad or sub-optimal outcomes. Ultimately, whether economic freedom yields positive or negative outcomes is an empirical question. This chapter examines over 1,300 peer-reviewed journal articles that have cited the index published in Economic Freedom of the World. Of these, over 700 articles looked at the impact of economic freedom on the human condition and most find a link between high or increasing levels of economic freedom with gains in prosperity and other measures of well-being; less than one in 20 find negative consequences.

Chapter 4: Doing Business 2.0: A Better Guide for Policy Makers
Simeon Djankov
In its two decades of existence, the annual Doing Business report became a flagship publication of the World Bank and one of the primary data references in the area of improving the business environment. The decision of World Bank management to discontinue the Doing Business report has presented a challenge for countless research organizations that depend on the report’s data for ongoing research projects. It also poses a challenge to policy makers, as these data are one of the helpful aids in understanding and reforming business regulation. This chapter proposes how an independent, academic institution could feasibly carry on the Doing Business project in a way that improves the process and the product.

Economic Freedom of North America 2022 Dean Stansel, José Torra, Fred McMahon, Ángel Carrión-Tavárez
Economic Freedom in the Literature: What Is It Good (Bad) For? Robert A. Lawson
Economic freedom—something to brag about in Florida and beyond Matthew D. Mitchell
Freedom and the Health of Nations Alan Dowd