The Fate of NAFTA: Possible Scenarios and their Implications for Canada 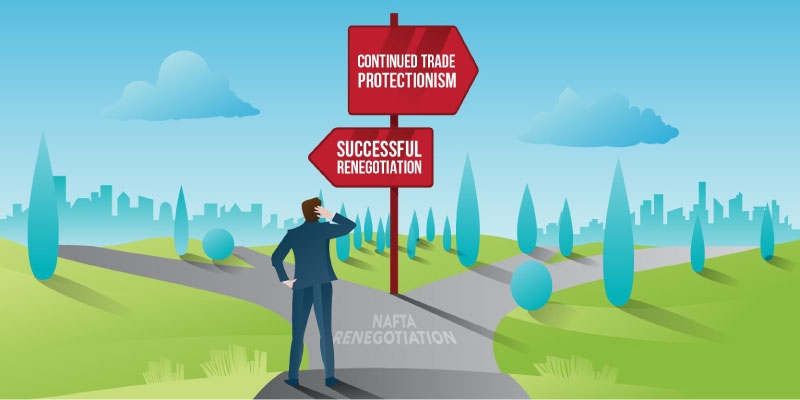 The United States, Canada, and Mexico are scheduled to commence negotiations on the North American Free Trade Agreement (NAFTA) in mid-August 2017. While many observers believe that the negotiations will be “successful,” in that the Agreement will continue in some amended form, the recently announced US goals, as set out in a report by the US Trade Representative’s Office, suggest that both Canada and Mexico will face difficult political challenges if they accede to US negotiating objectives.

For the Canadian government, a number of negotiating objectives pose political challenges. Most notably, the US goal of unrestricted access to Canada’s domestic agricultural markets represents a direct threat to Canada’s dairy (and other) supply management programs. The US demand for Canada to allow entry of US firms in all sectors would require that Canada eliminate foreign investment restrictions in banking, telecommunications, and a number of cultural industries, among others. The US call for Canada to adopt US intellectual property protections would require the Canadian government to strengthen legal protections enjoyed by foreign manufacturers of branded pharmaceuticals, while the US government’s desire for unrestricted cross-border flows of digital information will, over time, threaten Canadian broadcasting regulations that directly and indirectly promote the production and distribution of Canadian entertainment programming.

While these various consequences can all be argued to be in Canada’s long-run economic interests, they might prove too politically contentious for Canada to accept, especially if Canadian negotiators fail to gain concessions from the US that are important to Canada. These include a robust dispute resolution mechanism with clear limitations on the ability of the US Administration to take trade actions against Canadian exporters.

Our report notes that the two governments never formally ended the Canada-US Free Trade Agreement (FTA), which went into effect in 1989. Hence, a reasonable premise is that if NAFTA is disbanded, the FTA will “snap back” as the legal structure governing Canada-US trade and investment relations. However, if the US Administration is unhappy with Canada’s negotiating position at the upcoming NAFTA meeting, it will not be happy with a fallback to the FTA, especially since the FTA does not address the concerns recently expressed by the US Trade Representative. As such, the US Administration will undoubtedly either withdraw from the FTA or call for a renegotiation of that Agreement. Moreover, if the Canadian government found US demands at the NAFTA negotiations to be politically unacceptable, it will be even more difficult politically for Canada to agree to the demands in a purely bilateral negotiation without its Mexican partner also making obvious concessions.

If the FTA were not the governance structure for bilateral economic relations, those relations would be governed by the rules of the World Trade Organization (WTO). On the surface, there would not be a dramatic change in the governance structure, since the FTA (and NAFTA, for that matter) incorporate the major principles of the WTO including national treatment, rights-of-establishment, and transparency. Furthermore, the average most-favoured nation Canadian and US tariff rates for most commodities are relatively low, although there would certainly be substantial tariff increases for specific commodities including in the important transportation equipment sector. As well, while the WTO has a dispute resolution process, many would argue that it is weaker (from Canada’s perspective) than the admittedly problematical dispute resolution process under NAFTA.

The inference one can draw is that there will be increased barriers to Canada-US trade under the WTO compared to either the FTA or the NAFTA. Empirical evidence suggests that the trade liberalization measures under the FTA increased bilateral trade and promoted efficiency gains in Canadian industries that experienced the largest decreases in trade protection, although the magnitudes of these FTA-related changes are uncertain. Indeed, some economists argue that the magnitudes are relatively small when other factors influencing bilateral trade are taken into account, such as the Canada-US exchange rate.

Against this background, one might conclude that a reversion to the WTO as the governance regime for Canada-US economic relations would have only modest impacts on the Canadian economy, especially if Mexico did not conclude a successful bilateral agreement with the US. This conclusion is strengthened by the observation that Canada can and should continue to work towards liberalizing trade with its other trade partners, including those in the relatively fast-growing Pacific Rim. Nevertheless, a successfully renegotiated NAFTA is more economically advantageous for Canada than a reversion to the WTO regime or than two separate US bilateral agreements with its NAFTA partners.

Even though domestic trade and investment liberalization may hurt specific Canadian producers, such liberalization is in the long-run economic interests of Canada as a whole. Furthermore, some of the US demands, such as the call to reduce trade barriers related to differences in regulations and for expedited customs procedures, would unequivocally improve the bilateral trade environment. However, if NAFTA cannot be successfully renegotiated, it would not be economic Armageddon for Canada.