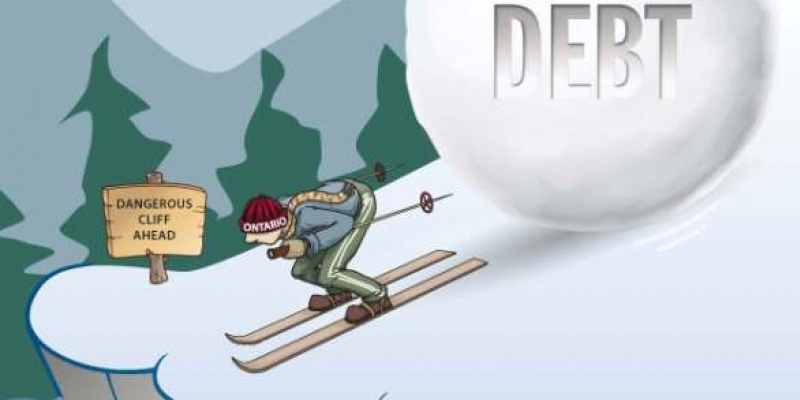 The Ontario government’s net debt has expanded from 28% of the provincial economy in 2008/09 to an expected 40% in 2014/15. This represents an increase of over $117 billion or $7,800 more debt per On-tarian. The debt-to-GDP ratio is now much higher than during the fiscally challenging decade of the 1990s, when it peaked at 32%. The growth in debt since the recession is due mainly to exceptionally high spending rather than weakness in revenues. By 2010/11, revenues were back above their pre-recession level but the gap between spending and revenues had grown enormously.

What forms of spending caused Ontario’s debt take off? Was it investments in infrastructure or current spending on government operations? The answer matters because higher current expenses (or “operating” expenses) should be paid for with current taxes. In contrast to current expenses, spending on infrastructure creates physical assets, such as highways and hospitals, that generate benefits for many years, often decades. While it can make sense to use debt to finance long-lived assets and to repay the capital debt gradually as the assets wear out, borrowing to pay for current expenses is harder to justify because it puts future taxpayers on the hook for today’s benefits. The result is an intergenerational inequity.

The study finds that Ontario’s increased debt since the recession is primarily attributable to operating deficits, rather than capital investments. More specifically, about 66% of the increase in provincial government debt from 2009/10 to 2014/15 is due to current expenses exceeding revenues. Even over the longer term from 2002/03 to 2017/18, current expenses are the main cause of the rise in debt. In other words, Ontario has gone deeper into debt to pay for spending that the current generation of taxpayers will enjoy while passing on the bill to future generations.

Although the Ontario government is planning to eliminate its operating deficit by 2017/18, it is important to understand that achieving a balanced operating budget does not necessarily mean that debt will stop growing. This is because the operating budget only includes current expenses, not the cost of capital investments. Thus, the government’s plan to make significant infrastructure investments over the next decade will conflict with the need to restrain provincial debt.

The study also finds that Ontario’s debt has been growing at an unsustainable rate, implying that spending cuts or tax increases are required to reduce the debt over the longer term. Otherwise, main-taining unsustainable fiscal policies will likely provoke further credit rating downgrades.

The study uses two indicators to assess whether Ontario’s fiscal policies since 2001/02 are sustainable. The first examines whether the present value of Ontario’s debt projected in the government’s fiscal outlook for 2017/18, from the standpoint of 2001/02, is above the value of the debt in 2001/02. This is a period that spans 16 fiscal years, which is a sufficiently long period of time to smooth out the effects of the business cycle. Under this indicator, fiscal policy is unsustainable.

The analysis suggests that Ontario must reduce spending or raise taxes to slow the growth in debt and to pay down the debt over the longer term. By not changing course from the status quo, Ontario’s debt-to-GDP ratio may reach 51% by 2017/18 (as estimated by the “Drummond Report”) or potentially as high as 66% by 2019/20 (as estimated by Kneebone and Gres, 2013). Research by Alesina and Ardagna (2010) based on the experiences of OECD countries shows that fiscal adjustments achieved through spending cuts without tax increases tend to be more successful in lowering operating deficits and debt-to-GDP ratios than adjustments based on tax increases.

The lesson is that it pays for governments to be prudent during years of relatively good economic performance. Although Ontario ran primary surpluses from 2002/03 to 2007/08, these were insufficient to offset the subsequent expansion in spending and interest on the debt after the 2008/09 recession.