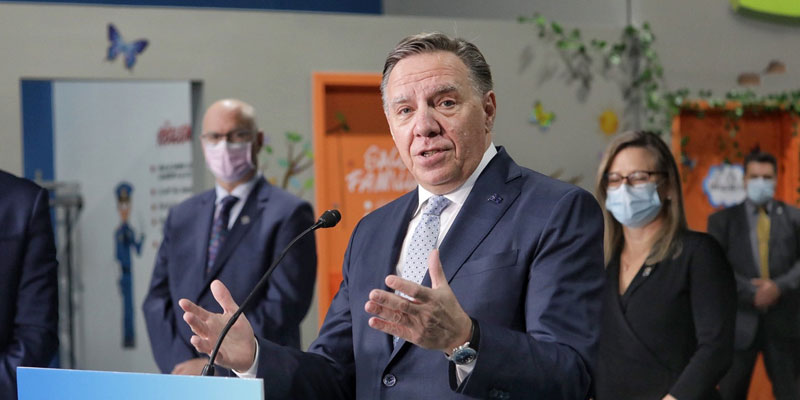 Being a relatively small share of North America’s population, Quebec’s French-speakers have always had good reasons to feel concerned about their fate as a linguistic community. Over time, these concerns have spurred calls for government intervention and legislation to stop or reverse a perceived decline in French usage in the province. Answering these calls, the Legault government recently proposed Bill 96, which intends to limit public services in English. But Bill 96 uses a false premise to propose costly policies that are unlikely to achieve their stated objectives.

First, contrary to popular perception, the use of French is not declining in Quebec. Census documents show that 94.5 per cent of people in Quebec can speak French—a proportion that has remained stable over the last two decades. As economists Vincent Geloso and Alex Arsenault Morin have highlighted, more and more francophones in Quebec are using multiple other languages at home alongside French as immigration leads to more mixed-linguistic marriages.

However, as French tends to be used as the main business language (according to census data), the coexistence of French with other languages at home does not translate into a global reduction in French usage. Indeed, after tracking individuals according to language used both at home and at work, the two economists found that 88.5 per cent of Quebecers report using French as the “most spoken” in both places. That proportion has been stable since 2001.

Again, Bill 96 will not likely yield substantial increases in French usage, and the costs will be important. Language choices tend to depend on family and business settings. For example, a high number of tourists and foreign students are bound to make English a dominant language in hotels and restaurants in downtown Montreal, even if businessowners are French-speaking. Adding regulations about language use will simply make it harder for these businesses to cater to tourists and foreign students who, in any case, will eventually leave Quebec.

Similarly, restrictions on francophones going to English CEGEPs (publicly funded colleges providing technical, academic and vocational education) are unlikely to yield any effects. Linguistic choices and patterns are generally set in early childhood. When young adults make decisions about college, choosing to learn another language does not crowd out the knowledge of other languages. At that point, new languages are mere additions to human capital just like an extra year of college. Preventing Francophones from going to English CEGEPs only reduces their earning potential.

From a business perspective, while the Legault government has said it wants to keep head offices in Quebec (and attract more business to the province), Bill 96 clearly goes against this objective. Forcing businesses to adopt new linguistic obligations will add to an already heavy regulatory burden in Quebec. With English being the international language of business, the bill will make hiring bilingual employees more difficult. For many businesses, it will be the last straw and an added incentive to relocate activities outside the province to avoid losing ground against their competitors.

Every year, large numbers of francophone workers leave Quebec for other provinces (for at least the last 50 years, Quebec has had a negative migratory balance with other provinces). The literature on intranational migration shows that policies such as business regulation and personal and corporate tax rates help drive migration. Quebec, with its heavy regulatory burdens and high tax rates on both firms and households, is essentially driving out large numbers of francophone workers who dilute themselves into the English-speaking majorities of other provinces. In other words, high taxes and burdensome regulations contribute to weakening the French language in Quebec.

If the Legault government wants to develop policies that go beyond nationalist theatre, it should realize there’s a simple set of policies that would strengthen the French language in Quebec. Instead of adding new layers of regulation, it would remove some of the layers that hurt the economic prospects of Francophones.