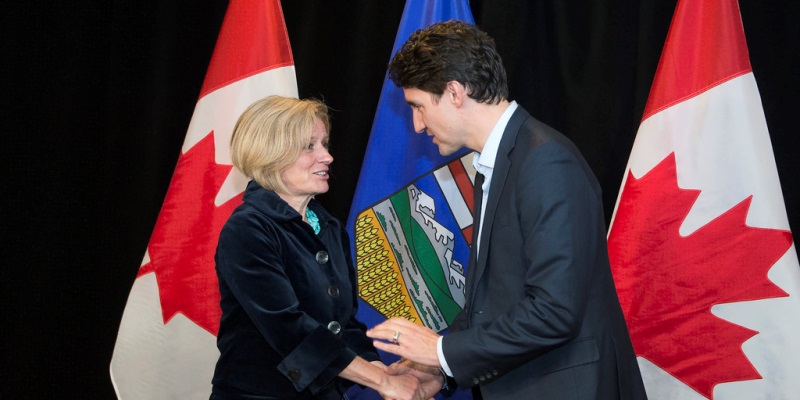 Prime Minister Justin Trudeau recently came out to the heartland to deliver yet another sermon/threat about the federal carbon tax. Speaking at Saskatchewan Polytechnic, he defended his government’s actions on climate change, pipelines and, of course, his carbon tax.

Apparently feeling the heat of widespread (and growing) provincial opposition to his carbon tax plan, he is field-testing new language to justify what is simply another tax. Now, the prime minister says he’s putting a “price on pollution” and that the “idea of putting a cost, a price on pollution is not just to bring in money… It's actually to encourage someone to say, well it won't cost me as much if I only pollute half as much." A Liberal MP is cited as admitting this is a rebranding exercise to tap into people’s reflexive dislike of “pollution.”

But Alberta is already feeling the pain of Premier Rachel Notley’s carbon tax, and eventually will feel the pain of Trudeau’s carbon tax, unless legal challenges to the federal plan are upheld, a prospect generally considered unlikely.

As I’ve noted before, capital investment in Canada’s oil and natural gas in 2017 was $45 billion, down 44 per cent compared to $81 billion in 2014. Statistics Canada expects capital spending in Canada’s oil and gas sector is to decline by 12 per cent in 2018, following a four-year decline.

But it’s not only in the abstract realm of international investing and attractiveness of the province as a place to bet your money. No, we’re now starting to see the up-close and personal impacts of carbon taxes and the implicit taxation that is the pending $15 minimum wage.

Meghan Potkins in the Calgary Herald reports that a revered Calgary landmark, Heritage Park, faces a financial crisis of rising costs from the carbon tax and minimum wage hikes that could force the park to cut programming unless they get financial support from the city. That would mean taxpayers would pick up the tab for Heritage Park’s greenhouse gas emissions. The park estimates the cumulative impact of carbon tax and minimum wage increases will hit $1.7 million by 2019. It’s likely only a matter of time before we hear the Calgary Stampede needs tax relief, along with other landmark attractions in our economically-stricken city.

And it can only get worse if Prime Minister Trudeau has his way and carbon taxes rise inexorably to $50/tonne of emissions by 2022. And if his proposed Bill C-69, which restructures the environmental assessment process for resource projects (including pipelines), is enacted into law.

As Professor Bruce Pardy (Queens Law) writes “Under C-69, EAs will consider a wider variety of objections to project approval. It signals government receptiveness to constituencies hostile to project approvals.” Hal Kvisle, former CEO of TransCanada Corp., called the bill a “devastating piece of legislation” adding he doesn’t “think any competent pipeline company would submit an application if Bill C-69 comes into force.”

While opposition to carbon taxes and the restructuring of environmental assessment grows, there’s little evidence the prime minister will ease up on either file. Heritage Park may only be a harbinger of things to come, when actions meet consequences.