Prime Minister Justin Trudeau’s government has repeatedly claimed to have cut income taxes on middle-class Canadian families—a key campaign promise. But as a recent study finds, reality does not match the government’s rhetoric. When all the Trudeau government’s income tax changes are considered, the vast majority—81 per cent—of middle-class families in Canada will pay $840 (on average) more in income tax this year.

While it’s true the Trudeau government reduced the second lowest personal income tax rate from 22 per cent to 20.5 per cent (which currently applies to individual incomes between $45,916 and $91,831), the government also made several other income tax changes that increased the taxes paid by many Canadian families. Specifically, the government eliminated a series of tax credits—which are provisions in the tax code that reduce a person’s income taxes if they qualify—including income-splitting for couples with young children, the children’s fitness tax credit, the public transit tax credit, the education tax credit and the textbook tax credit.

The chart below displays the percentage of Canadian families by income group that’s paying higher taxes due to Ottawa’s personal income tax changes. Each income group represents one fifth of Canada’s nearly four million families with children. Families in the middle-income group—the middle-class—have incomes between $77,089 and $107,624. 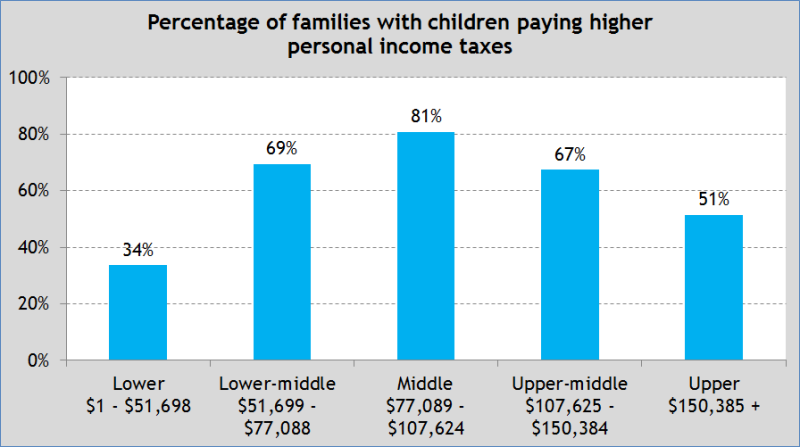 Again, contrary to the government’s claims, when all income tax changes are considered, more than 8-in-10 middle-class Canadian families are paying more in personal income taxes because of the Trudeau government’s tax changes. The main reason for this higher tax bill is the elimination of income-splitting for couples with young children. While the cut to the second lowest federal rate produced an average tax decrease of $228 for middle-class families, eliminating income-splitting alone resulted in an average tax increase of $949. Elimination of the other tax credits increased the income tax burden further.

First on the campaign trail, and then repeatedly in office, the Trudeau government vowed to cut income taxes for Canada’s middle class. In reality, its income tax changes, when taken together, have had the opposite effect and actually increased the amount of income taxes the vast majority of middle-class families pay.