A misleading analysis of CEO pay in Canada

Every year, an organization releases a report that compares the average wages and salaries of Canadian workers to the total compensation of Canada’s top 100 CEOs. The report claims CEO pay is excessive and that governments should step in by raising taxes. As we previously pointed out, the analysis is deeply flawed.

The report finds that Canada’s top 100 CEOs earned an average $9.0 million in total compensation in 2014 or 184 times the average worker’s wages and salaries.

This comparison breaks a basic rule of statistics by comparing apples to oranges, using a definition of CEO pay that is much more wide-ranging than that used for average workers.

Specifically, the compensation figure for CEOs includes not just base salaries but all forms of compensation such as bonuses, company shares, stock options, “perks” and pensions. Meanwhile, the pay of average workers only includes their salaries—not pensions and other benefits. So right from the start, the report exaggerates the pay gap between workers and senior management.

Another glaring issue with the comparison is that the top 100 CEOs are not a representative sample of Canadian corporate leadership. These are not your average corporate leaders; they are the top people—the superstars with unique talents and qualities in high demand. Presenting their compensation as being typical of CEOs is like saying Sidney Crosby’s salary ($12 million) is representative of the average NHL salary ($2.6 million).

The data cover a narrow measure of compensation: wages and salaries. And the data are for a broad occupational group: senior management (which includes more than just CEOs—for instance, senior government managers and officials fall into this group). 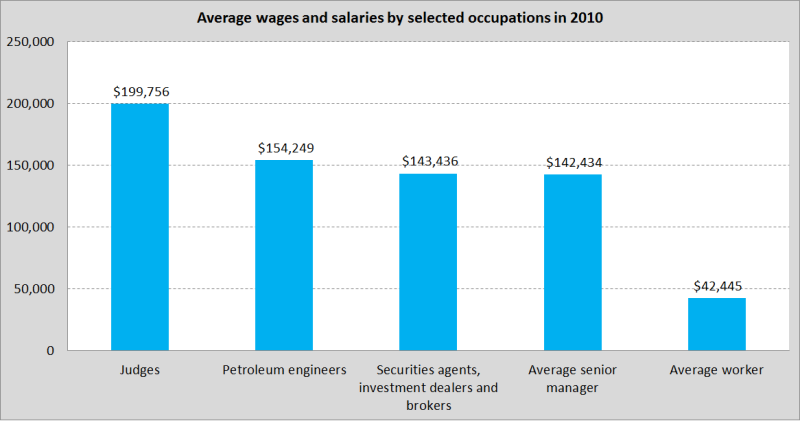 The point is not that senior managers, and by extension CEOs, deserve more or less pay relative to the average worker. The compensation of senior managers is a matter for owners to fret about, not governments. But a meaningful discussion about CEO pay should not be based on faulty and misleading statistics.