A worrying trend—size of government in Canada on the rise

Every year Maclean's magazine invites economists and policy analysts to submit what they think is the most important chart Canadians should watch in the upcoming year, as it relates to the economy. Needless to say, choosing a single chart is a difficult task. But it does force one to think hard about their choice. In my case, I chose a chart with broad sweeping economic implications.

All Canadians need to follow closely what’s happening with the size of government, which is on the rise. This is a worrying trend because the evidence shows bigger government may lead to lower levels of economic growth and social progress.

There’s no doubt that we need government to provide important public services, critical to a well-functioning economy. But there’s a point when a larger, more interventionist government, combined with a heavier tax burden, can stunt economic growth and social outcomes (better health, improved education, lower crime, etc.), or achieve those outcomes only at great additional cost. For instance, government spending becomes unproductive for the average Canadian when it goes to special subsidies for businesses, otherwise known as “corporate welfare.”

So what’s the right size of government?

In Canada, total government spending (including federal, provincial, and local spending) is much higher than what empirical evidence shows to be optimal—more than 40 per cent of GDP. While the size of government is now lower than in 2009, when it reached almost 44 per cent of GDP, the decreasing trend has reversed sharply in the past two years. With the federal and many provincial governments ramping up spending, there’s a risk that if the current trajectory persists towards a bigger government sector, economic growth in Canada could be hindered. 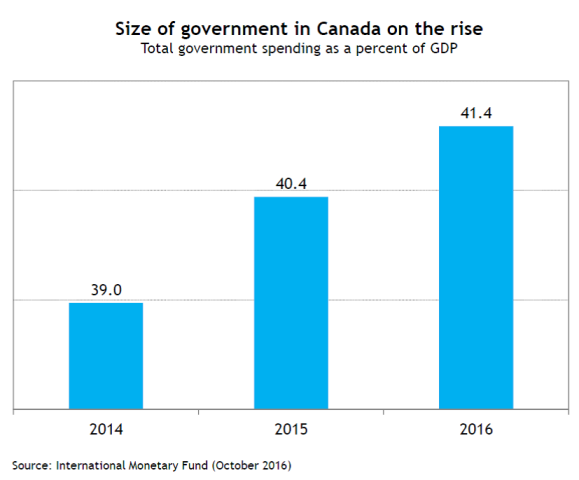