Actually, including capital spending, Ontario’s deficit is more than $32 billion

Ontario’s 2018 provincial budget saw total operating expense reach $158.5 billion with total revenues at $152.5 billion, for a deficit of just over $6 billion. But there has been some debate over government accounting methods and the actual size of the deficit, with the most recent salvo from the provincial auditor general arguing that the deficit is actually $11.7 billion once Ontario Public Service Employees Union and Ontario Teachers’ Pension Plan assets are removed from the bottom line.

Of course, if you include this year’s capital spending, which is being added to the debt independently of the operating budget, you can add another $21.1 billion to spending bringing the deficit estimate up to $32.8 billion.

Along with the debate over the government’s accounting of pension assets and capital spending, it’s also interesting to examine where expenditure growth is occurring. What are the fastest and slowest growing expenditures by government department? 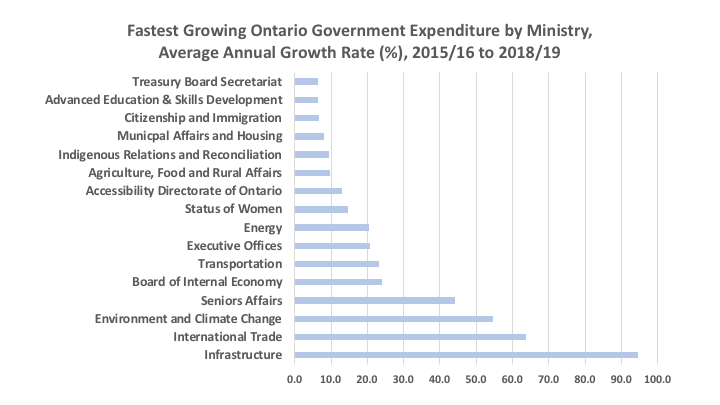 For “slower” growing ministries, they range from a low of 1.3 per cent for Natural Resources and Forestry to a high of just under 6 per cent for Community and Social Services. Health over this period is growing at 3.9 per cent annually—just under the average for total operating expenditures at 4.5 per cent—while Education has also been growing well below the average at 2.7 per cent. The only government ministries to see a shrinking budget over this three-year period are Francophone Affairs (at an average annual rate of -0.8 per cent), Government and Consumer Services (-0.9 per cent), Finance (-10.4 per cent), and Tourism, Culture and Sport (11.1 per cent). 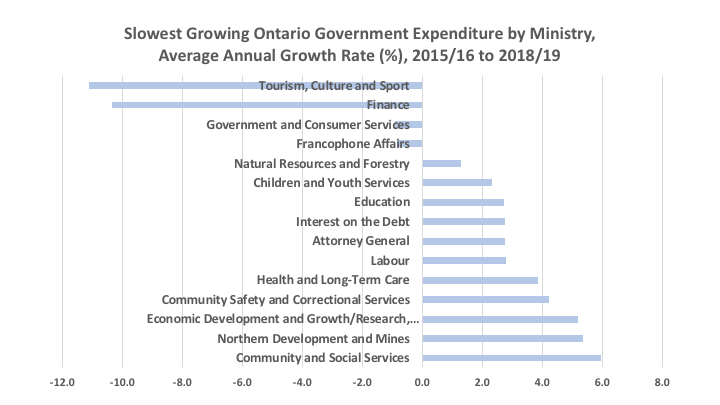 Given the precarious state and importance of Ontario’s public finances, it’s indeed curious that the provincial Ministry of Finance’s operating budget has dropped from $2.4 billion in 2015/16 to $1.7 billion in 2018/19. Much of this reduction comes from reduced power supply contract costs (from $875 million to $182 million), which is included in the ministry total along with the Ontario Municipal Partnership Fund. However, the base funding for Finance has indeed shrunk, from $1.048 billion to $986.2 million—a decline of nearly 2 per cent annually.

On the other hand, perhaps Finance is leading by example and has been structuring its affairs more efficiently in a message of economy to other ministries. If so, based on the size of projected Ontario deficits over the next six years, the message seems to be falling on deaf ears.