However, these overall numbers do not reveal what are some important gains in manufacturing in many jurisdictions—especially in the U.S. Indeed, these gains come at a time when additional opportunities may present themselves with the recent signing of the Trans-Pacific Partnership (TPP) trade agreement.

Using data from Statistics Canada, the U.S. Census Bureau and the U.S. Bureau of Economic Analysis, the per cent change in manufacturing’s share of GDP was calculated between the years 2000 and 2014 for 50 U.S. states and 10 Canadian provinces. Of these 60 jurisdictions, fully one-third actually saw an increase in their manufacturing share of GDP while the remainder witnessed a decline. The first chart below plots the top 20 growth jurisdictions while the second chart plots the bottom 20. 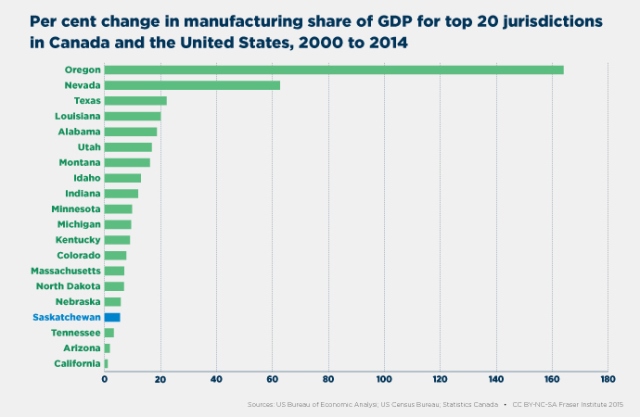 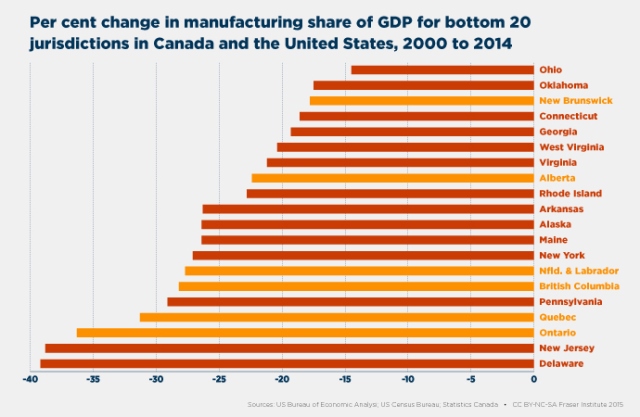 Despite the constant angst about the decline of manufacturing, it would appear that a manufacturing rebound is indeed underway in some parts of the U.S. Indeed, a recent study has highlighted the performance of the so-called Rust Belt states compared to Ontario and Quebec. The rebound is being led by rising labour productivity and an expansion of advanced manufacturing opportunities. Oregon is in the forefront of this trend with computer and electronic manufacturing and exports of electronic integrated circuits, processors and controllers. Moreover, the new manufacturing is less labour intensive and higher productivity. While manufacturing employment has grown in Oregon in recent years, fewer people are producing more manufacturing output than in 2000.

The unfortunate part of this story is that Canada has generally not been part of this rebound in manufacturing. The industrial heartland of Ontario and Quebec in particular are among the worst performers with little indication of this trend abating. This lack of competitiveness will put Canadian manufacturing in a poor position when it comes to taking advantage of manufacturing opportunities from the expanded markets of the TPP.