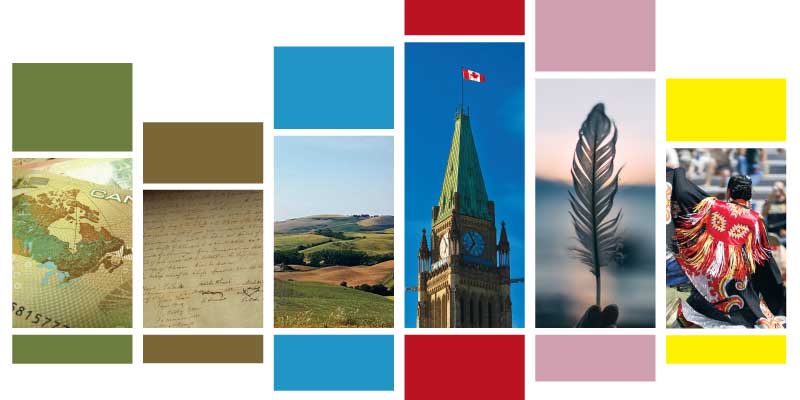 In September 1850, Canada signed the two Robinson Treaties, thus acquiring the Indian title to more than 50,000 square miles (130,000 square kilometres) north of Lakes Superior and Huron, running approximately from the modern city of Thunder Bay to the town of Penetanguishene at the southern tip of Georgian Bay. These treaties are now the subject of a lawsuit, known as the Restoule case named after the lead plaintiff Mike Restoule. The litigation may have momentous implications for Ontario and indeed all of Canada.

Because the land was ill-suited for agriculture, the government in 1850 considered it less valuable than southern Ontario, where earlier treaties had been signed. Hence, Canada was willing to pay annuities of only $1.60 or $1.70 a head, compared to the $10.00 a year that had been common further south. Yet prospecting for minerals was already underway, so it was understood that the land might become more valuable in the future because of its natural resources. Hence the Robinson treaties contained a feature, now known as the “augmentation clause,” not found in any other Canadian treaty. It provided for a possible increase in annuities if resource revenue from the land grew, and a decrease if the native population declined.

Restoule depends crucially on the meaning of the augmentation clause. The words most in dispute are italicized.

… should the Territory hereby ceded … produce such an amount as will enable the Government of this Province, without incurring loss, to increase the annuity hereby secured to them, then and in that case the same shall be augmented from time to time, provided that the amount paid to each individual shall not exceed the sum of one pound Provincial Currency [$4.00] in any one year, or such further sum as Her Majesty may be graciously pleased to order; and provided further that the number of Indians entitled to the benefit of this treaty shall amount to two-thirds of their present number, which is fourteen hundred and twenty-two, to entitle them to claim the full benefit thereof. And should they not at any future period amount to two-thirds of fourteen hundred and twenty-two, then the said annuity shall be diminished in proportion to their actual numbers.

The above quotation is from the Robinson Huron Treaty; the Robinson Superior Treaty contains the same wording except for a different population total. The 19th-century phrasing is convoluted but not impossible to understand. The clause says:

In point of historical fact, annuities were increased to the stipulated maximum of $4.00 a year in 1875 but have remained constant ever since. In Restoule, the Robinson treaty nations now argue that, because of growing resource revenues, the Crown had an obligation to increase annuities above $4.00 a year, and the missing annuities should now be repaid with interest. The total sum could be in the billions, depending on what numbers are arrived at for resource revenues, interest and discount rates, and population count over the years from 1875 to the present.

Enter the jurisprudence of treaty interpretation created by the Supreme Court of Canada. In various cases, the Court has ruled that it is not enough to parse the words of a treaty. Judges must try to discover the “common intention” of the treaty negotiators, using extrinsic evidence of various kinds. This can include historical documents written by participants in or witnesses to the treaty negotiations, such as interpreters, missionaries, traders, and police officers.

Since the native people seldom left their own written records, courts must also be open to their oral traditions about what treaty negotiators said. Courts may also consider anthropological evidence about the Indigenous culture of the time to determine how native leaders might have understood the government’s legal language.

All these sometimes nebulous and anachronistic factors are to be viewed in light of the “Honour of the Crown,” which has become a master principle dictating that Indigenous views are to be given the benefit of the doubt. Courts are not supposed to overturn the plain meaning of the treaty, but interpreting the text according to judicially discovered “common intention” can come very close to that.

When Restoule was before the Ontario Superior Court of Justice, Justice Patricia Hennessy used all these forms of extrinsic evidence to produce a new reading of the augmentation clause. She determined that the words “as Her Majesty may be graciously pleased to order” did not mean executive discretion but an obligation reviewable by the courts. She also found that there were two different annuities, even though the treaties mention only one—a collective annuity to be paid to the tribes, plus individual annuities payable to members, and the $4 limit applied only to the individual annuities. She also found that the treaties created an Indigenous right to a “fair share” of resource revenue, even though the evidence at the trial showed that those words did not appear in any historical document and were not spoken during the negotiations.

The Ontario Court of Appeal, in its decision released on Nov. 5, 2021, reined in Justice Hennessy’s interpretation to a degree. It nullified her “fair share” doctrine as well as her dictum that Canada and Ontario would not be able to count the cost of building infrastructure and institutions (roads, housing, medical care, education, etc.) in calculating compensation for the missing annuities. But the essence of the decision still stands—Canada and Ontario had a justiciable obligation to consult with the First Nations about increasing the annuities after 1875. According to the court, negotiations should commence now, in order to avoid further uncertain and expensive court proceeds, and the courts can supervise the process and review the outcome.

Ontario is pretty much on its own here. In the spirt of Jodi Wilson-Raybould’s practise directive, issued shortly before she left the office of Justice Minister in 2019, Canada did not appeal the Restoule trial decision. Indeed, Canada has largely given up mounting a vigorous defence in court against Indigenous claims. Ontario, therefore, had to go alone to the Court of Appeal and still may try to go to the Supreme Court of Canada. But even if negotiations on compensation begin quickly, the courts have given little guidance on how to evaluate net resource revenues, offsetting expenditures, interest and discount rates, and population counts. Defining and measuring these quantities over 150 years could employ generations of accountants.

In a narrow sense, Restoule will have no further effects beyond this one dispute, because no other Canadian treaty has an augmentation clause. However, the case will be influential on future litigation because it exemplifies Canadian courts’ current activist approach to treaty interpretation, giving rise to readings which, even if not directly contrary to the treaty text, can certainly yield unexpected results.

Ontario Premier Doug Ford recently announced his determination to carry through with the Ring of Fire mining project in the Treaty 9 region, which lies north of the Robinson treaty areas. Developing the Ring of Fire is supposed to be the key not only to a mining boom but to the manufacture of electric vehicles in Ontario, which will require the rare metals found in the chromite deposits of northern Ontario. In other words, this is a major piece of the government’s “Driving Prosperity” strategy in support of the automobile industry. “We’re doing it,” Premier Ford said, taking pains to sound decisive.

The premier is obviously relying on the wording of Treaty 9, signed in 1905, according to which the First Nations of northern Ontario “cede, release, surrender and yield up to the government of the Dominion of Canada, for His Majesty the King and His successors forever, all their rights titles and privileges whatsoever, to the lands [described in the treaty].” He accepts the obligation to consult with the First Nations of the region; but as the courts have said in recent decisions, the right to be consulted is not a power of veto.

After Restoule, however, things, however, may not go so smoothly. Three First Nations—Neskantaga, Attawapiskat and Fort Albany—have already declared a moratorium on developing the Ring of Fire. A lawyer for the Attawapiskat has declared that the land “has always been and still is solely” the property of the First Nations, thus contradicting the language of land cession contained in Treaty 9. In 2010, historian John Long published a book entitled Treaty No. 9: Making the Agreement to Share the Land in Far Northern Ontario in 1905. Based on historical records, especially the diary of one of the treaty commissioners, Long argued that the treaty as explained to the assembled First Nations was very different from the wording inscribed on parchment. Hence his conclusion that the treaty was an agreement “to share the land,” not to convey ownership from the Ojibwe and Cree to Canada.

First Nations who want to block the Ring of Fire will mount an argument that the real treaty is something different from the wording of the treaty text. If the courts respond to that argument as they did in the Restoule interpretation of the augmentation clause, Ontarians will have to continue to buy batteries manufactured in China from rare metals mined in that country, rather than from a homegrown mining and manufacturing industry in Ontario, and “Driving Prosperity” will be headed for the ditch.