CPP expansion will do little to boost rate of return, particularly for younger Canadians

Last month Canada’s federal and provincial finance ministers announced an expansion of the Canada Pension Plan (CPP). Some have tried to justify expansion by claiming that the CPP provides a high rate of return for retired Canadians.

The rate of return will increase after the announced changes to the CPP are implemented, but only slightly.

Starting in 2019, workers will be required to pay more into the program in exchange for higher CPP retirement benefits. Once fully implemented in 2025, the total CPP contribution rate (which is split notionally in half between employees and employers) will increase from the current rate of 9.9 per cent to 11.9 per cent of eligible earnings up to a maximum of $72,500. In addition, earnings between $72,500 and $82,700 will also be subject to mandatory CPP contributions, albeit at a lower rate of 8 per cent.

While some technical issues on the changes to the CPP have not yet been clarified, we re-calculated the new rate of return that Canadians can expect based on the available details.

The results are not impressive (see chart below). Canadians born in 1971 or after can now expect to receive a rate of return from their CPP contributions of between 2.3 per cent and 2.5 per cent (depending on their specific year of birth). In other words, there is only a small increase in the rate of return for younger Canadians under the expanded CPP—2.5 per cent or less after expansion versus 2.1 per cent before expansion. 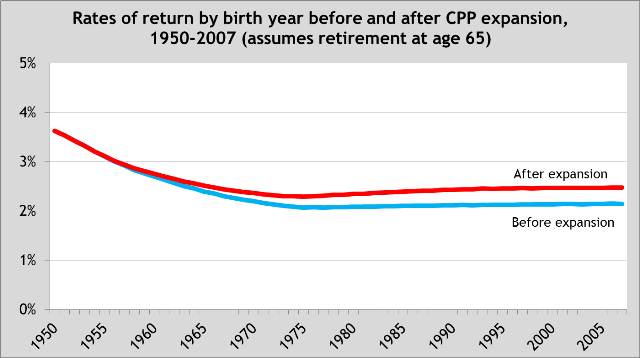 So despite claims that the CPP provides Canadians with a strong rate of return, Canadians—particularly younger Canadians—will continue to receive a meagre return for their CPP contributions even after expansion.