Defence spending in Canada—a look at the data

Recently in Brussels, U.S. President Donald Trump chastised several NATO members—including Canada—for not meeting their commitment to spend 2 per cent of gross domestic product (GDP) on national defence. Canada is among the 23 of 28 current NATO members that does not meet the target. The five that do are Britain, Estonia, Greece, Poland and the U.S.

Specifically, Trump said: “This is not fair to the people and taxpayers of the United States… If NATO countries made their full and complete contributions, then NATO would be even stronger than it is today, especially from the threat of terrorism.”

While national defence is arguably one of the core functions of government, it is not necessarily the case that if countries such as Canada met NATO’s arbitrary spending target of two per cent there would be increased global safety. The type of spending matters; not just the total amount spent.

That said, Trump’s comments prompted us to examine the state of national defence spending in Canada. Here’s what we found.

In 2016, Canada spent $20.6 billion on national defence, according to NATO data. In nominal terms, that’s 88 per cent higher annual spending compared to 30 years ago. However, once the effects of inflation are properly accounted for, defence spending has actually fallen slightly by 4 per cent since 1986. 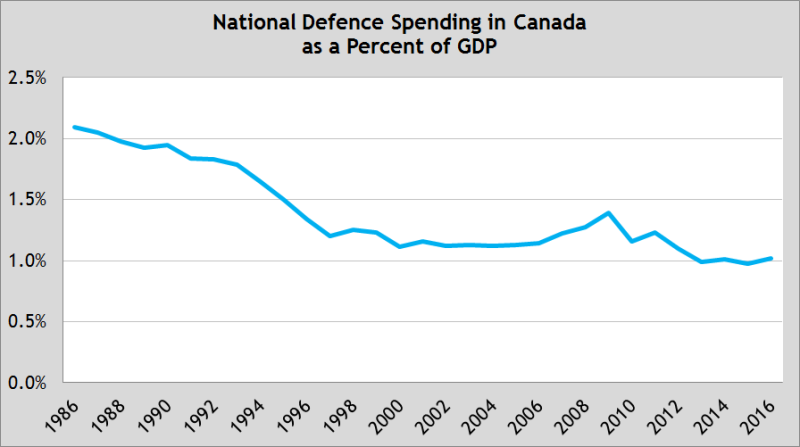 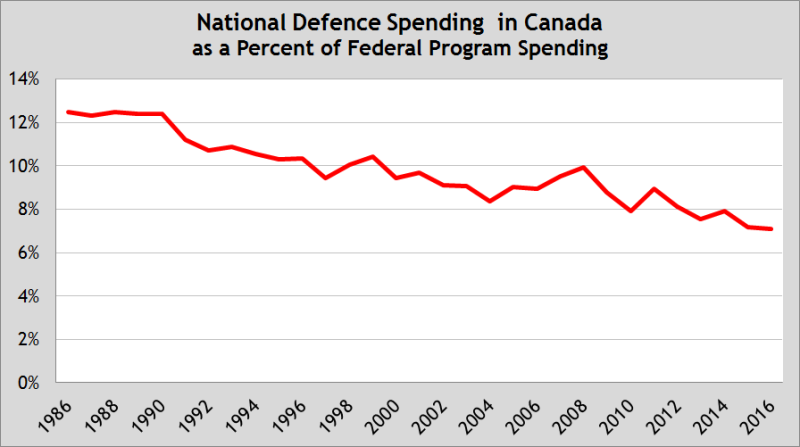 What are we to make of this?

All we can really say is that spending on national defence in Canada is lower on various measures. Further analysis is required to determine whether the amount spent is too low, too high or just right.

But one thing is certain—if Canada were to deliver on NATO’s arbitrary spending target of 2 per cent of GDP, this would require a doubling of current national defence spending and have serious budget implications. With an expected budget deficit of $28.5 billion, the federal government would have to either scale back spending elsewhere, raise taxes further, or dig even deeper in debt.