The OECD has just launched a handy “Dashboard of Household Indicators” that makes for easy comparison of several measures of household well-being in different member countries. It’s a useful addition to the OECD’s already very useful website. (Wish that StatCan’s site was so user-friendly!)

Among the several indicators, it tracks two in particular that struck my eye: real disposable (i.e. after-tax) household income, and consumer confidence. You’d think the two would be correlated—that when things are going well and people’s incomes are rising they become more confident about the future.

But, as the chart below shows, the two series seem almost completely uncorrelated, maybe even inversely correlated. (For clarity: the disposable income series has 2007 as 100, so the increase shown is basically the percentage increase since then. The consumer confidence series is also base 100 but the base is a long-term average so the increase in points since 2007 doesn’t quite indicate a percentage change. In most cases, however, the change in the index is so small that it probably doesn’t matter.) 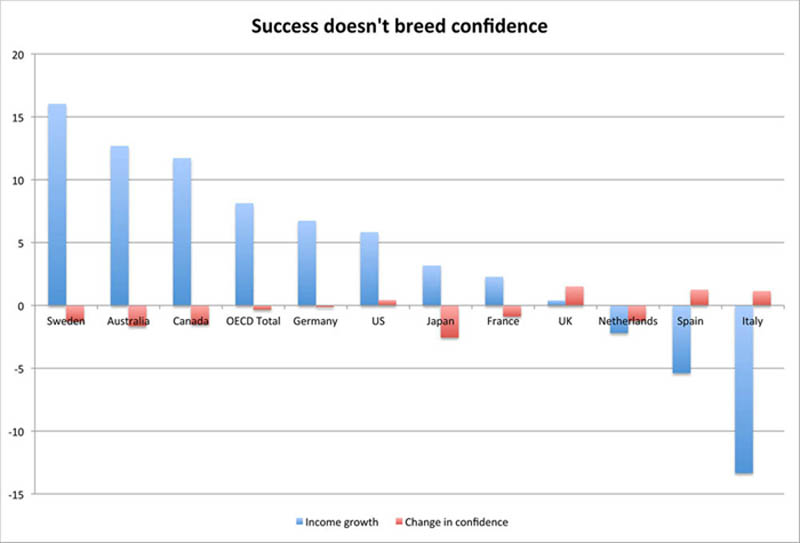 How does Canada do? We’re third overall in growth, at 11.7 points, behind only Sweden and Australia (which makes you wonder why the Conservatives aren’t way ahead in the current federal election). But consumer confidence is down since 2007 by 1.5 points.

You might think that’s typically Canadian; we don’t let success go to our heads but instead rain on our own parade. But note that it’s also true of Sweden and Australia, the two countries that have outperformed us economically. And while all three top-performing countries have suffered declines in consumer confidence since 2007, the two worst-performing ones, Spain and Italy, have both experienced increases, albeit small ones.

What’s going on? Maybe confidence is now globalized, so everyone has pretty much the same outlook. Or maybe people are aware that, as the prospectuses say, “past performance is not a guarantee of future results.” Maybe Spaniards and Italians figure the worst is now behind them while Swedes, Australians and Canadians fear their relatively good times have come to an end.

Whatever the reason for it, our flaccid confidence seems bound to colour our impression of our recent economic performance, which by this measure at least has actually been pretty good—both absolutely and relative to other rich countries.