Feds decision on LNG in B.C. a step in the right direction

The federal Liberals took a step in the right direction for Canadian natural resources development yesterday with their approval of the Pacific Northwest LNG export facility in Northern British Columbia. The government recognized that the project, as well as the associated upstream natural gas development, could lead to substantial economic investments of up to $36 billion. The results will be jobs and salaries for Canadian families, and revenues for governments to fund important services such as health care and education.

While Pacific Northwest LNG has yet to make its final decision on whether to move forward with the project, this does move the project and its economic benefits one step closer to to fruition.

Should liquefied natural gas (LNG) facilities not be built in B.C., the costs could be substantial. A 2015 Fraser Institute study found that the cost of regulatory delay imposed upon LNG investments in B.C., defined as export revenues forgone, is substantial, starting at C$22.5 billion per year in 2020, rising to C$24.8 billion per year in 2025. This means that the delays have already likely resulted in foregone revenues. 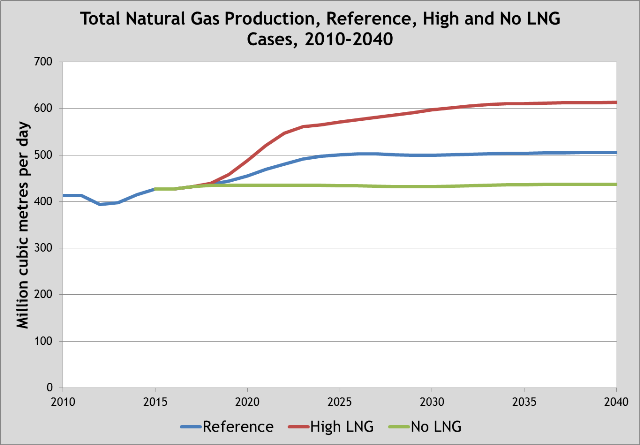 The economic opportunities exporting LNG and Canadian natural gas to Asian markets could also be considerable. The International Energy Agency recently forecasted that natural gas demand in Asia is expected to increase from 461 billion cubic metres (bcm) in 2013 to 1,202 bcm in 2040, or almost 25 per cent of global demand. Canada has a lot to lose if we can’t get full access to these markets.

To be clear there’s still a long way to go until an LNG export terminal is actually built in B.C. and Pacific Northwest LNG faces a long road ahead, with the government placing 190 legally binding conditions on their approval, including a cap on the amount of emissions from the facility. Pacific Northwest LNG will also likely face a number of legal challenges in the coming future. All that being said, this approval is a step in the right direction, and it could help Canadians achieve greater public and private economic gains from developing our resources.