After Canada’s finance ministers met back in December 2015, the push to expand the Canada Pension Plan (CPP) halted somewhat, with the ministers agreeing to revisit the issue at their June 2016 meeting. As we have noted before, the evidence shows that our existing retirement-income system is performing well, providing most Canadians with an adequate standard of living upon retirement.

There is, however, a problem area among current seniors but, as we will explain, expanding the CPP in its current form will do little to help the group of seniors who actually need it.

Let’s begin with how seniors are doing overall in terms of their economic standing. The fact is fewer seniors live in low income today than at any point over the past four decades, and seniors are less likely to experience living in low income than the rest of the working age population.

As the chart below demonstrates, the percentage of seniors living in low-income has consistently fallen over the past four decades (low-income is defined by Statistics Canada’s low income cut-off, which is not, strictly speaking, a measure of poverty as in the deprivation of basic needs, but rather a measure of low income relative to other members of society). From 1976 to 2013 (the latest year of available data), the share of seniors living in low income fell from 29.0 per cent to 3.7 per cent. 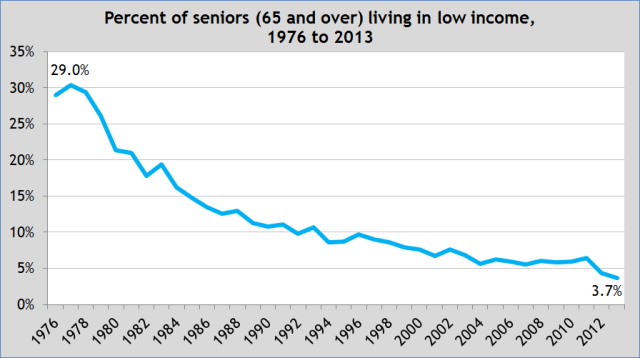 In 2013, 10.7 per cent of Canada’s working age population (ages 18 to 64) lived in low income status—much higher than the 3.7 per cent of seniors (ages 65 and over) in that same year. In other words, a working age Canadian is almost three times more likely to be living in low-income than a senior Canadian.

It’s also the demographic least likely to be helped by an expansion of CPP. A recent study published by the University of Calgary found that single seniors tend to receive relatively low benefits levels from CPP. A key reason is that they have minimal work history, which means they will not be helped much by an expanded CPP. Critically, the benefits received through the CPP program are tied to one’s contributions throughout their working years.

A more effective alternative to expanding the CPP is to increase other public pension benefits, namely through the Guaranteed Income Supplement program, for low-income single seniors living alone with a minimal work history. Fortunately, the government seems to be considering such a policy change in the upcoming federal budget.

This sort of approach would better target the seniors most in need of assistance. Rather than expend political time and energy on enhancing the CPP, a much more fruitful approach is for Canadian governments to focus on exploring ways to provide assistance to single seniors living alone in low income.