The recent interest rate hike by the Bank of Canada has renewed concerns over household debt and the ability of Canadians to manage rising debt service costs, given that household debt has reached record levels. However, as a recent Fraser Institute study found, concerns over household debt in Canada often fail to properly account for the other side of the balance sheet. Canadian households have taken on more debt, but their assets—real estate, retirement savings, financial investments, etc.—are appreciating over time, causing their net worth to also reach unprecedented levels.

Ironically, while government officials and top policymakers continue to sound the alarm about growing household debt, government debt is arguably a far more pressing concern. Over the past 26 years, government-sector debt (gross) in Canada has grown from approximately $700 billion in 1990 to more than $2.5 trillion in 2016.  However, whereas recent increases in Canadian household debt have been accompanied by increases in net worth, the same cannot be said about government debt.

First, consider households. Household debt in Canada increased to more than $2 trillion in 2016, up from $357 billion in 1990. Crucially, however, household assets also increased in value over the same time period—from $2.2 trillion in 1990 to $12.3 trillion last year. As a result, household net worth, which is total assets minus debt, rose to $10.3 trillion—a historically high level (see chart below). 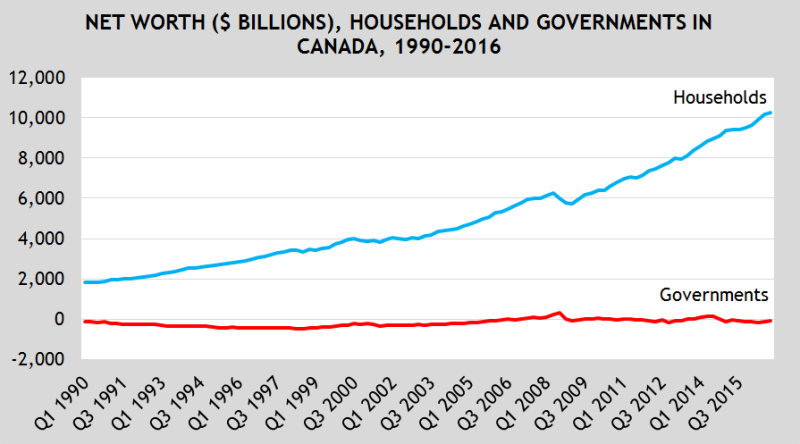 It’s somewhat hypocritical for governments to warn Canadians about rising household debt levels given the state of their own finances, particularly in recent years. In fact, since 2007, governments across Canada have racked up considerable debt while their collective net worth during this period has actually decreased and remains negative.

If governments really want to help households with their debt, they could start by balancing their budgets and reducing their own debt levels. After all, in the end, Canadian households are not also managing their own private debt loads, but also servicing those of government via their taxes.