How does Alberta’s deficit stack up against the other provinces?

Alberta’s budget is coming in a couple weeks and expectations are that the government will unveil a deficit for the current fiscal year totalling at least $5.9 billion. How does this number stack up against the other provinces?

Using the latest publicly available data, the first graph (below) shows that, in dollar terms, Ontario is projected to have by far the largest deficit this year at $8.5 billion. Alberta is projected to have the second largest at $5.9 billion, and Newfoundland & Labrador is next at $1.1 billion. Interestingly, only two provinces will be “in the black” so to speak, with Quebec projecting a balanced budget and B.C. projecting a relatively small $277 million surplus. The remaining eight provinces expect deficits. 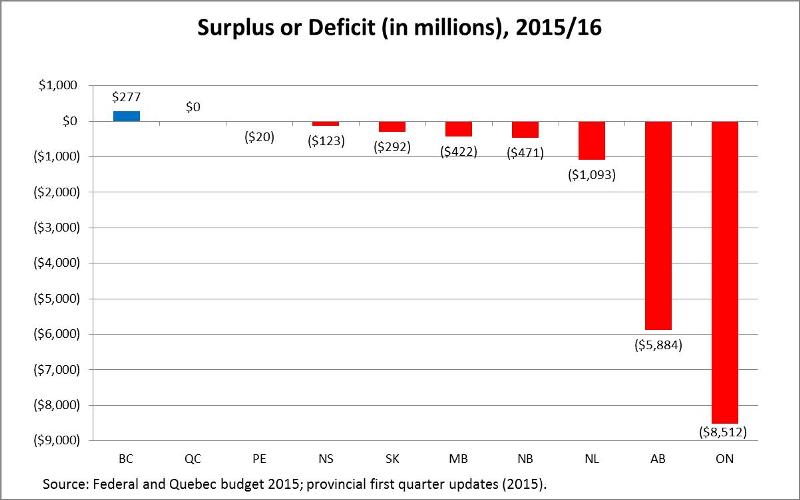 Comparing deficit levels based on their absolute size can be misleading since some provinces have much larger populations and economies than others. For instance, with approximately 13.8 million residents, Ontario has roughly 38.5 per cent of the total Canadian population. Alberta, on the other hand, with 4.2 million people, is home to 11.7 per cent of Canadians.

Figure 2 adjusts the deficit and surplus data in the second graph (below) by population. In per capita terms, Newfoundland & Labrador now has the largest projected deficit for the 2015/16 fiscal year at $2,071. Alberta has the second largest with a projected value of $1,402 per person. Ontario falls to fourth highest at $617 per person. Surprisingly, Alberta’s deficit, when adjusted for population, is 2.3 times larger than that of Ontario, which is the Canadian poster child for bad fiscal management. 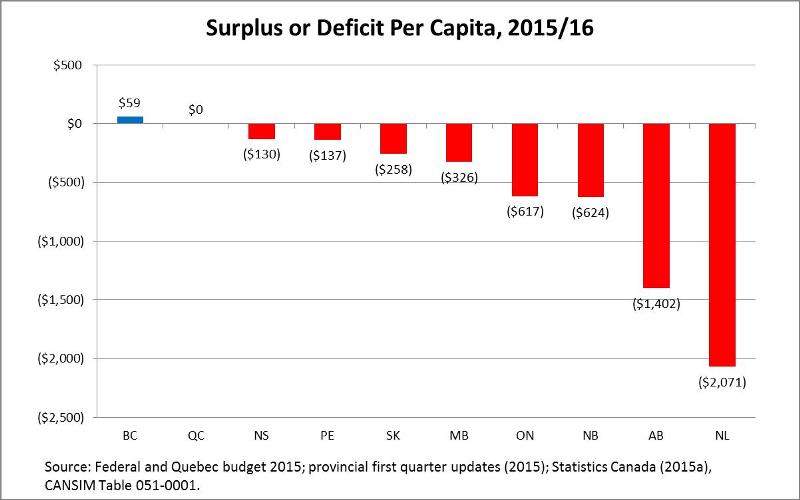 The third and final graph presents the deficit and surplus data relative to the size of the provincial economy (GDP). The results are virtually the same as those in Figure 2. Newfoundland & Labrador has the largest deficit totalling 3.47 per cent of provincial GDP, followed by Alberta (1.77 per cent). Ontario has the fourth largest deficit at 1.14 per cent. When adjusted for GDP, Alberta’s deficit is 1.5 times larger than Ontario’s. 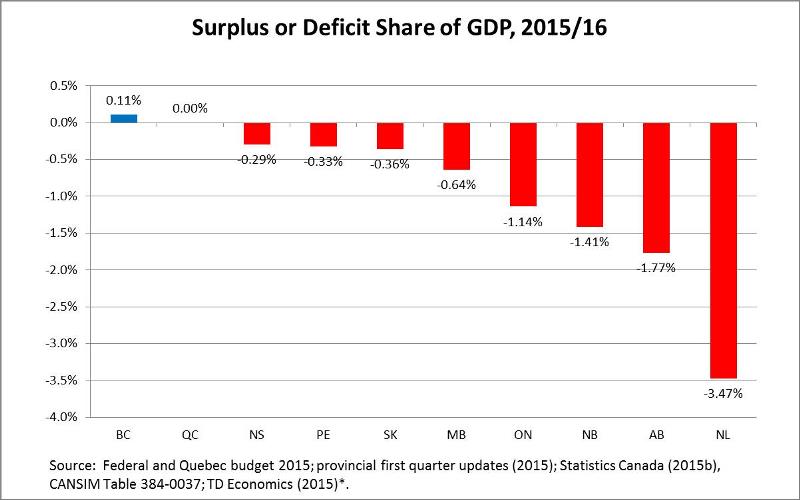 Whether we examine deficits in dollar terms or adjusted by population and economy, the provincial comparisons highlight the dire fiscal situation in Wild Rose Country.

Alberta has run deficits in seven of the last eight years, and its financial position has eroded with net assets (a measure of assets adjusted for debt) falling from a high of $35 billion in 2007/08 to an expected $3.9 billion this year. Alberta is now at risk of returning to a net debt position (where the total value of government debt exceeds financial assets) for the first time in more than 15 years.

Unfortunately, Finance Minister Joe Ceci has cautioned that Alberta’s deficit could be higher still, “in the range of $6.5 billion.” Bold and decisive action is needed to put provincial finances on a better footing. Let’s see if the government is up to the task.