In education in Canada, shouldn’t improvement be the priority?

The Quebec secondary school rankings are out and once again they offer evidence that, at some schools, academic results are improving.

Analyzing the results from the school years 2009/2010 through 2013/1014, we found 47 schools (out of the 452 that were rated) that enjoyed statistically significant improvement in their overall rating during the period. The fastest-improving school is École secondaire Vallée-des-Lacs in Saint-Michel-du-Squatec (see chart below), a municipality of only about 1,200 people some 250 kilometres downriver from Quebec City. 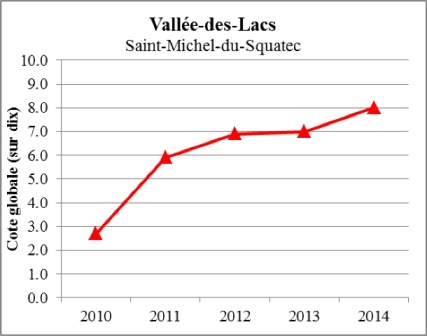 What we know about this French public school is that in 2013/2014 it enrolled just under 100 students and that 27 per cent of them had an identified special need. That proportion is 5.3 percentage points greater than the average for all the ranked schools.

Particularly impressive is the rapid drop in the exam failure rate on ministerial exams which, in 2013/2014, reached a five-year low of just 11.5 per cent compared to the average failure rate of 19.1 per cent.

But, while we can see evidence of improvement, we cannot tell what caused it.

A glance at all 47 of these improving schools tells us that in big schools and small schools, urban and rural, private and public, French and English, regardless of the characteristics of the students, improvement is possible. Many of them will undoubtedly have a story to tell about how they accomplished the improvements in their students’ learning. Improvement might be rooted in more successful ways of teaching, in changes to assessments, or better communication with parents, in better direction from the principal, or by providing better learning supports to students. Perhaps there are other reasons.

The point is, the experience of these schools can be used to help drive improvement in other schools and thereby benefit thousands more students.

Schools demonstrating successful improvement programs should not be ignored. They have much to teach us. And now seems about as good a time as any to begin learning from schools like École secondaire Vallée-des-Lacs.