For months now, Canadians have been inundated with news of investors turning their backs on Canada and the federal government has done nothing to respond to growing concerns that Canada is an unattractive place to invest.

Rather than acknowledge these concerns, and the storm of data pointing to a serious investment problem in Canada, federal Finance Minister Bill Morneau (pictured above) issued a bizarre tweet last week (see below). 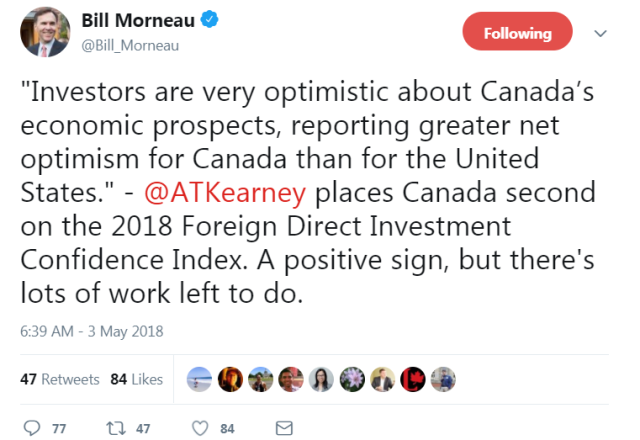 Specifically, Morneau pointed to an index by A.T. Kearney, an international management consulting firm, that’s based on a survey of global business executives that “ranks markets that are likely to attract the most investment in the next three years.” The survey results are then transformed into an index that A.T. Kearney calls the Foreign Direct Investment Confidence Index. Canada ranked second out of 25 countries, behind only the United States.

So how does A.T. Kearney’s index square with reality? Not well.

The 2015 index did not do a good job of predicting where foreign direct investment (FDI) would go over the next three years (2015-2017). The Organization for Economic Cooperation and Development (OECD) collects data on FDI net inflows for 22 of the 25 countries covered in the index. For those 22 countries, there’s essentially no correlation between the index score and the average FDI as a percentage of GDP (2015-2017) that a country received (r = 0.02). (For some countries data is not available for 2017; excluding them makes little difference to the result.)

Moreover, despite Canada regularly appearing in the top five on the index since at least 2013, FDI into Canada has fallen every year since 2013 (see graph below). FDI in Canada increased steadily after the 2008/09 recession reaching $71.5 billion in 2013. It then fell by 56 per cent to $31.5 billion in 2017. This is hardly a sign that foreign investors have a high degree of confidence in Canada—at least not lately. 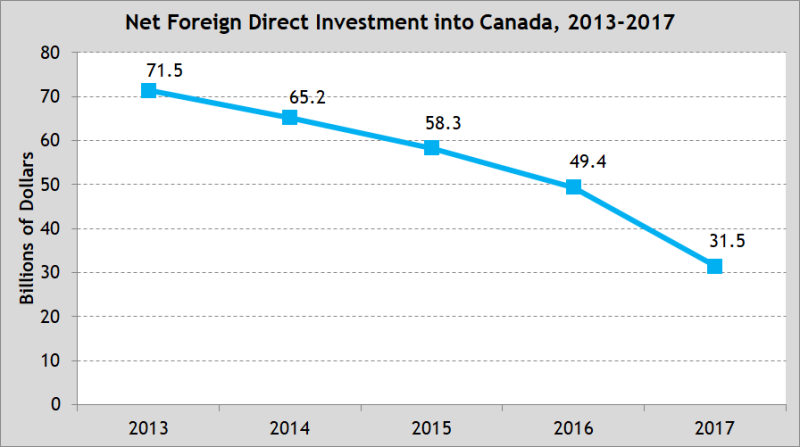 More broadly, there’s telling evidence of an investment problem in Canada not isolated to FDI. For instance, business investment (excluding residential structures) is down nearly 20 per cent since the third quarter of 2014. And a recent study found that Canada has the second lowest level of business investment as a share of GDP among a group of 17 industrialized countries.

Canadians have little reason to be optimistic the situation will turn around in 2018. The uncertainty surrounding the future of Kinder Morgan’s $7.4 billion Trans Mountain Pipeline expansion is just one prominent example of investors pulling back from investing in Canada. Another is the announcement from Suncor—one of the world’s largest energy companies—that it will not invest in any major new projects, citing regulatory barriers and a general lack of competiveness. As Royal Bank of Canada CEO David McKay recently warned, “in real time, we’re seeing capital flow out of the country.”

Beyond these anecdotes, Statistics Canada’s latest survey on investment intentions for 2018 found that private-sector investment is slated to fall again this year—the fourth consecutive annual decline.

Clearly, Minister Morneau’s optimistic tweet is at odds with the evidence and suggests his government is out of touch with reality when it comes to Canada’s investment problem.