Ontario’s dispute with Liquor Control Board (LCBO) employees, which led to a tentative agreement earlier this week, highlights the continuing importance of “sin taxes” as a source of Ontario government revenue.

Indeed, provincial and federal governments in Canada derive a substantial sum of revenue from excise taxes on alcohol and tobacco as well as lotteries and casinos while at the same time actively seeking to discourage those activities. While one might argue higher taxes on alcohol and tobacco are a way of discouraging these activities and limiting their subsequent harmful effects, in the case of alcohol and gambling, they are also accompanied by active advertising encouraging use.

Ontario currently derives direct “sin tax” revenues from four main sources—tobacco taxes, beer and wine taxes (including liquor license fees), the retail activities of the Liquor Control Board (LCBO) and of course the revenues from the Ontario Lottery and Gaming Corporation (OLG). In 2000, nominal revenue from these four sources was $3.8 billion while in 2016 it was $6 billion. However, there’s considerable variation across the components as the below figure shows. 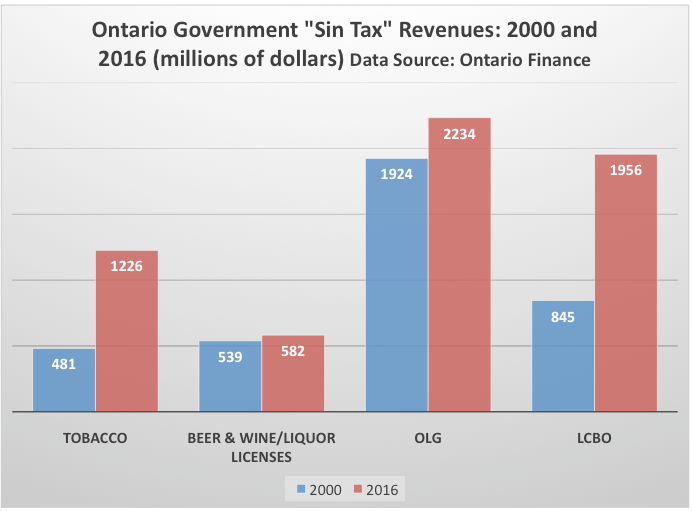 The revenue from liquor licenses/beer and wine taxes has stayed relatively flat over time, growing only by 8 per cent between 2000 and 2016. Casino, lottery and gambling revenues (OLG) have shown the next weakest growth (16 per cent) over the same time period. Indeed, in real terms these revenues have not kept up with inflation.

Again, the irony is that on one hand, the Ontario government runs campaigns and programs dealing with alcohol addiction, funds research into problem gambling, and Ontario’s police services are constantly dealing with drinking and driving. On the other hand, the glossy LCBO brochure celebrating Canada’s 150th “with a summery selection of wines, beers and spirits” came out last weekend.

One character notes how ice wine is his mother’s favourite drink and “Every holiday, I take home a bottle for her, which brings a big smile to her face.”

Then there’s the OLG lottery TV commercial where a winner waxes poetic on how winning $100,000 came at the right moment in his life and enabled him to visit his daughter. Thank you OLG!

It would appear the Ontario government, via its Crown corporations, is hard at work bringing families together with lotteries and booze. Ontario’s government may perhaps feel that any potential harm from using liquor and gambling sales to boost revenues can be wiped away by the redemptive value of warm and fuzzy advertising campaigns.

Of course, consumers have the right to choose to legally consume whatever they want and should always make informed choices to consume responsibly. What’s disconcerting is the vigourous enthusiasm with which governments, who are supposed to serve the public interest, appear to take advantage of  their citizens via the public-sector marketing and sale of products that are both lucrative sources of government tax revenue and damaging to its consumers, if not consumed in moderation.