There’s a remarkable economic transformation underway in Quebec. The economy is growing and the unemployment rate is down. Indeed, Quebec’s unemployment rate (three-month moving average, seasonally adjusted) in July at 5.9 per cent is the lowest it has been since the 1970s and is actually below the Canadian rate of 6.5 after years of usually being above.

More interesting is that Quebec is now also outperforming Ontario, which had a July unemployment rate of 6.3 per cent.

As for the two major provincial cities, Montreal’s unemployment rate in July was 6.3 per cent while Toronto’s was 6.9 per cent. These are indeed interesting times.

More robust economic growth in Quebec has also been matched with improvements in its fiscal situation. Indeed, Quebec balanced its provincial government budget in 2015/16—it actually registered a surplus of $2.2 billion—while Ontario is not expected to balance its operating budget until 2017/18.

However, the most striking difference between the two provinces when it comes to the public finances is the change in their provincial government net debt positions. Whereas Quebec has traditionally been regarded as more of a debt basket case than Ontario, the tide has turned.

Figure 1 (below) presents provincial government net debt for Ontario and Quebec for the years 2010/11 to 2015/16 with forecasts through to 2019/20 as presented by RBC’s Canadian Federal and Provincial Fiscal Tables. What’s remarkable is that Quebec appears to have arrested its upward trend in debt acquisition. Between 2014/15 and 2019/20, Quebec’s net debt is forecast to go from $185 billion to $187 billion. 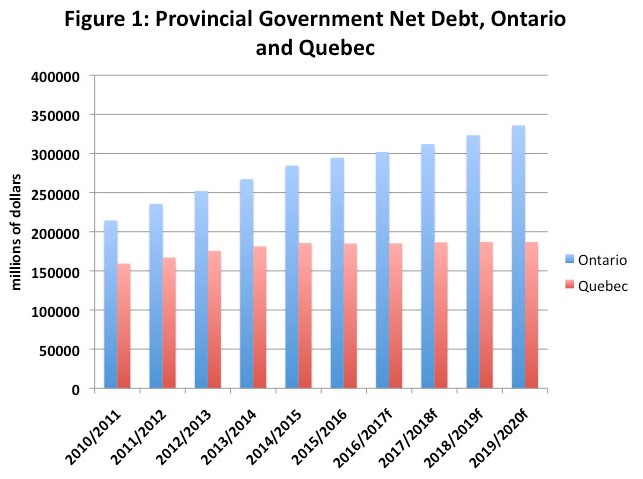 When it comes to per capita provincial government net debt, Ontario is projected to actually surpass Quebec in 2018/19 as demonstrated in Figure 2 (below). Between 2010/11 and 2018/19, Ontario’s per capita provincial government net debt is expected to rise from $16,331 to $22,613—an increase of 39 per cent. Meanwhile, over the same period, Quebec is expected to see an increase from $20,088 to $22,114—only 10 per cent. However, what’s more striking is that Quebec’s per capita net debt has actually fallen since 2014/15 and is projected to keep falling. 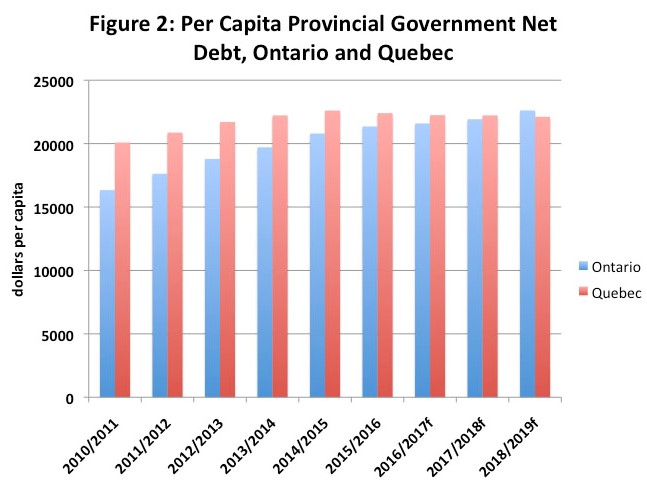 Of course, while Ontario has a larger net public debt than Quebec, its net debt-to-GDP ratio is lower at just under 40 per cent compared to Quebec’s, which is now just below 50 per cent. Nevertheless, the long-term trajectory matters and given Quebec’s current economic and fiscal performance it may very well be only a matter of time before its net debt-to-GDP ratio also falls below Ontario. Times are changing.