Recently released data from Statistics Canada highlights a fundamental shift in Canadian society over the past century and a half. Indeed, Canadians are having fewer children and are more likely to live alone, which means the average number of people per household has been steadily declining. This fact has wide reaching implications, not least of which is how it informs the debate about income inequality in Canada. 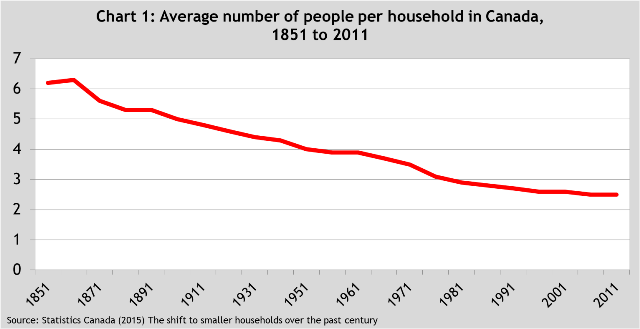 A smaller average household means that the household’s income will be spread among fewer people. For instance, parents with fewer children have fewer mouths to feed and fewer backs to clothe. Consider two households with the same income but where one has six members and the other has three. The potential resources available to each member of the smaller household would be larger.  While the larger household can share some costs such as furniture and housing in ways that reduce the per-person costs, its total costs are still higher than the smaller household. Thus, a straight comparison of the income level of differently sized households does not portray an accurate picture of the inequality between households.

This was demonstrated in a recent study led by Nipissing University professor Chris Sarlo that compared different measures of income inequality. The study found that the share of after-tax income earned by the top 20 per cent of economic families (which excludes singles) was smaller and grew more modestly from 1982 to 2010 after adjusting for household size (see Chart 2 below). Specifically, the unadjusted share of income grew by 11.2 per cent, while the adjusted share grew by only 6.5 per cent. Similar results were found for other measures of inequality. 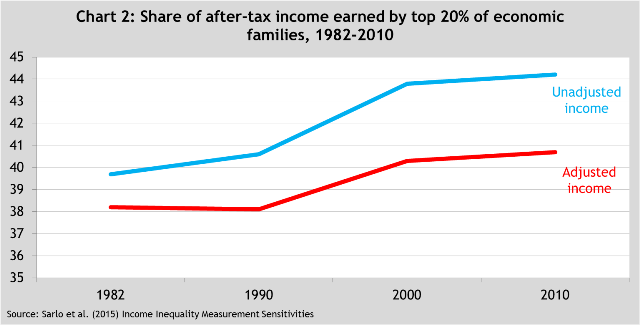 Income inequality is a hotly debated issue with potentially important policy implications, so it is critical to have a clear picture of the true extent and change in inequality. Among other things, this requires accounting for the fact that the average Canadian household has shrunk in size over time.