Canadians celebrated Tax Freedom Day on June 7 this year. That means if you had to pay your annual tax bill up front, you’d give government every dollar you earned before Tax Freedom Day. It’s only from June 7 onward that you’re finally working for yourself and your family.

If it sounds like you’re paying a lot of taxes, it’s because you are. You can easily lose sight of all the taxes you pay, which include everything from income taxes, payroll taxes, health taxes, sales taxes, property taxes, fuel taxes, profit taxes, to various “sin” taxes, and much more.

Some of these taxes are visible, but many are hidden, making it virtually impossible for the average Canadian to get a clear sense of all the taxes imposed by the different levels of government.

Therein lies the value of Tax Freedom Day. It’s a handy measure of the total tax burden imposed on Canadian families by the federal, provincial, and local governments. 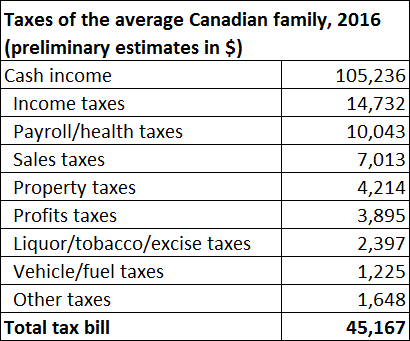 The important question, of course, is whether we’re getting value for all the taxes we pay to finance government spending. While it’s ultimately up to individual Canadians to decide, the first step is knowing how much tax you pay.