Comparing the Debt Burdens of Ontario and California 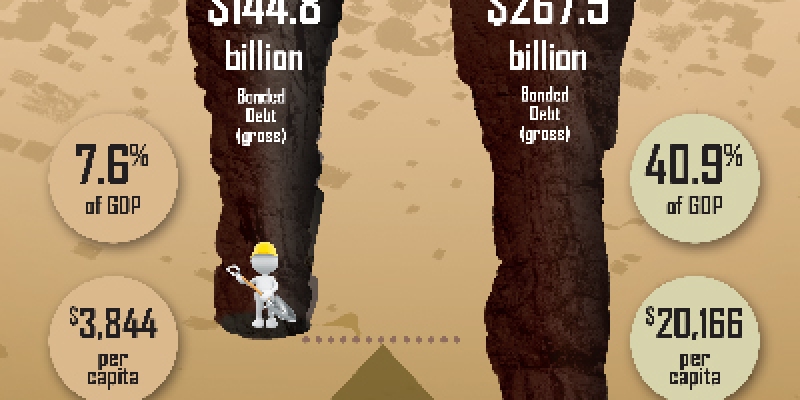 To many in the United States and Canada, California represents the epitome of irresponsible government spending coupled with poor cash management. However, the province of Ontario is carrying a much worse debt burden than the state of California. This paper uses a host of measures to compare Ontario's indebtedness to California's.

For instance, in a comparison of the outstanding gross amount of debt in the form of government-issued bonds, California (in the most recent year for which the data are available) carried US$144.8 billion, while Ontario carried CAD$267.5 billion, almost double California's amount. This figure understates the disparity between the two regions, because California has a much larger economy and government revenues than Ontario. The gross debt in the form of bonds is 7.6% of California's economy, while it is a whopping 40.9% of Ontario's economy.

Per person, Ontarians currently owe $20,166 (Cdn) compared to $3,844 for Californians more than 5 times the per capita level of debt. Consequently, Ontarians shoulder much higher debt servicing costs: 9.2% of budget revenues in Ontario are devoted to interest payments compared to 2.8% in California.

The solution to government debt problems are the same as for a household: spending must be brought in line with income. Fortunately, no harsh cuts are needed in Ontario's case; restraint in the growth of provincial spending will return the province to financial security. Ontario can be put back on a solid financial footing if spending growth on programs (not counting interest payments on the debt) is limited to 4 percent per year. This recommendation sounds modest, but represents a much tighter rein on spending growth than has been the case in Ontario over the last decade. The solution sounds simple, but the problem is very real. Ontario?s current financial trajectory is unsustainable. Serious curbs on spending growth may be uncomfortable now, but they will avert the possibility of a much worse budget crunch later on.