Consumption Inequality in Canada: Is the Gap Growing? 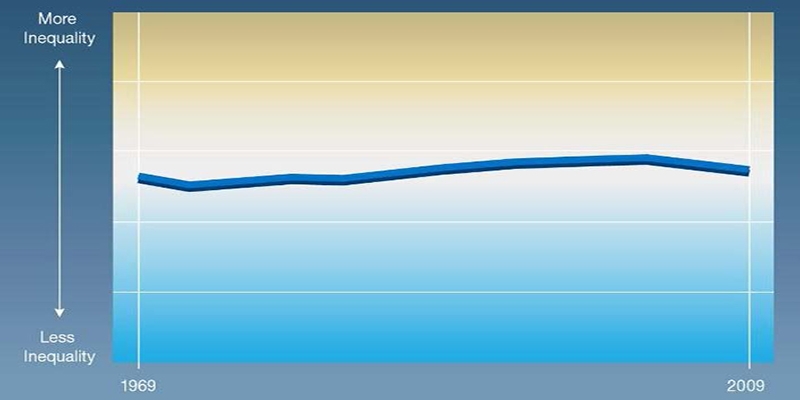 Increasing interest in economic inequality, especially in the media, has spawned an impressive number of academic studies, most focusing on income inequality. Inequality of consumption (people’s spending) has received much less attention. This study addresses this issue and provides measures of consumption inequality for Canada over the period 1969–2009.

This paper examines several conceptual and measurement issues related to consumption. For example, a difficult question arises as to how to handle the purchase of substantial durable assets, such as houses. Such assets yield a stream of consumption over a long period of time that is not adequately captured by mortgage payments. Those payments are highly variable. They can range from zero (for those who have paid off their home) to $20,000 or more—for exactly the same asset. Similar problems occur with durable goods like autos, furnishings, and major appliances. While there may be ways to impute the flow of consumption from durables, they are not perfect. Studies that make such adjustments typically do so for housing only. Unless there is an important change in the underlying pattern of the acquisition or distribution of such durable purchases over time, the case for adjustments and imputations is weaker.

Similarly with prices. The measurement of consumption inequality involves tracking the differences in actually reported, aggregate, nominal consumption over a period of time. We do not look at the individual choices that people make to get to those aggregate values, nor do we attempt to examine the price searching or the substitutions they made along the way.

In this paper, the only adjustment made to the raw data was for household size. We know that households have become progressively smaller over time, due both to reduced fertility and divorce. So the total consumption of a household is now shared by fewer members. Adjusting for household size using an equivalence scale is, by now, a standard practice for empirical studies of inequality.

This study, adjusting raw income and consumption data only for household size and using the Gini coefficient as the measure of inequality, finds that while income inequality has increased modestly (by about 11 percent) between 1969 and 2009, consumption inequality is only about 3 percent higher over that 40 year period. In other words, measured consumption inequality has essentially been flat. These results stand in contrast with the prevailing impression of a sharply growing gap and increasing polarization in Canada. This impression is heightened by a few reports that mismeasure income inequality. The torrent of media stories about an “alarming” rise in inequality has been effective in creating an image of a far more economically divided society.

It is important to point out that this result ignores such things as quality improvements (which likely benefit lower income households more) as well as price searching and substitution behaviour, which is likely to be equalizing. While this is certainly not the final word on the trend in consumption inequality in Canada, it does suggest that living standards are not more unequal now than was the case several decades ago. In other words, it is premature to claim that the gap in living standards between the rich and the poor is growing, at least in Canada.

Read the News Release
Go to the Full Publication