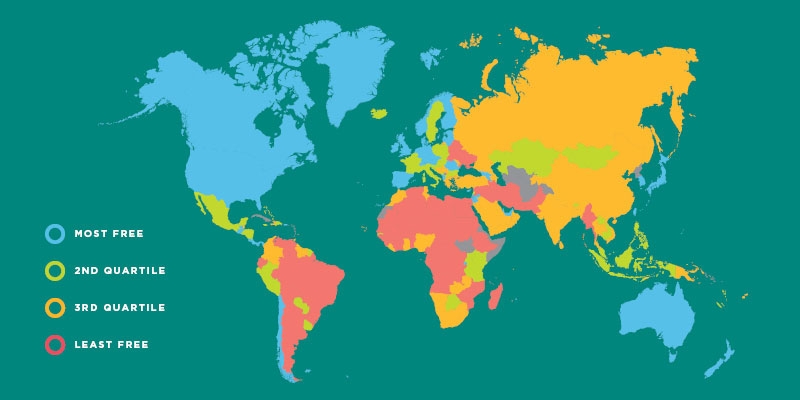 Three new countries, Belarus, Iraq, and Sudan, were added to the Index this year, bringing the total number of jurisdictions in the index to 162. The data are available annually from 2000 to 2016 and for years ending in zero or five back to 1970. The data are available for 123 countries for every year during 2000–2016 and for approximately 100 countries back to 1980.  This data set makes it possible for scholars to analyze the impact of both cross-country differences in economic freedom and changes in that freedom across a three-decade time frame.

Economic freedom around the world in 2016

Top-rated countries
Hong Kong and Singapore, as usual, occupy the top two positions. The next highest scoring nations are New Zealand, Switzerland, Ireland, United States, Georgia, Mauritius, United Kingdom, Australia, and Canada, the latter two tied for 10th spot. It is worth noting that the United States returned to the top 10 in 2016 after an absence of several years. Canada also returned to the top 10 after coming in 11th in 2015.

Chapter 1: Economic Freedom of the World in 2016
The authors of the report, James Gwartney, Robert Lawson, Joshua Hall, and Ryan Murphy provide an overview of the report and discuss why economic freedom is important.

Chapter 3: Measuring Global Support for Free Markets, 1990–2014
By Pál Czeglédi and Carlos Newland
In this chapter, the authors examine the evolution of popular economic thinking between 1990 and 2014 through the Free Market Mentality Index (FMMI), an index that seeks to capture perceptions in favor of a free economy. During this period, there is change from a popular appreciation of the market economy to a perspective more supportive of the role of government. After describing this trend, and its measurement, the authors explore some of the possible causes of philosophical differences among the population. This analysis shows that accounting for individual characteristics such as income, religion, or education can explain a part of the difference but does not eliminate the effect of time and country.