Fiscal Policy and Recessions: The Role of Public Infrastructure Spending 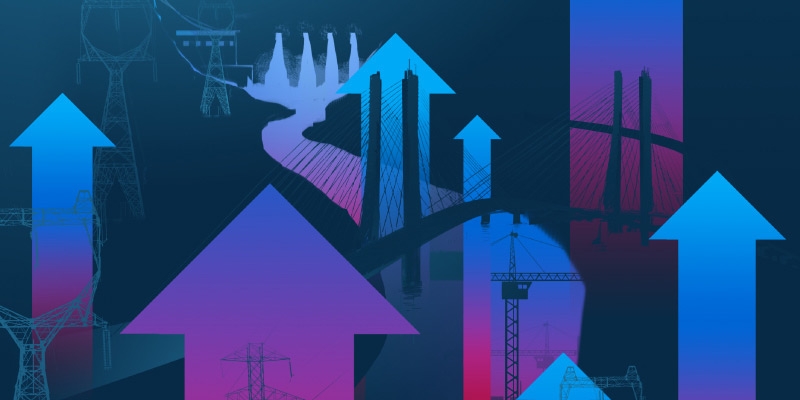 In recent decades, governments have placed particular emphasis on public infrastructure investment as a response to recessions.

Among the rationales for public infrastructure spending as a cyclical response is that during downturns, there is resource slack in the economy, meaning that plants and equipment, and time and human capital (people and their brains) are underused, and growth and income are lost. People’s skills may atrophy, and they move or change sectors, and future growth opportunities are lost at home.

Subscribers to this view may hold that the incremental spending keeps people and other resources gainfully employed in the near term, and longer term growth and public welfare are better than otherwise. An important aspect of this view is that the public spending, accelerated or not, may also improve private sector performance; for example, better road and other transport systems help private businesses do what they do, and so improve household incomes.

There are many difficulties with this view, however. Decision making and implementation take time, and governments have difficulty responding at the same pace at which the private sector adjusts. When governments do intervene, they may compete for human and financial resources that would otherwise be put to productive use without intervention. In other words, their actions may hinder recovery rather than encourage it. And expenditure commitments by upper levels of governments may displace those that would have been made by lower levels of government anyway, limiting potential gains. Speeding up investments, even if they are economically sensible, may borrow growth from the future, with uncertain impacts on the long run growth path.

Compounding the theoretical problems, empirical data provide dubious support for the case for discretionary public investment as a response to downturns. While some studies are supportive, many from the past few decades indicate low or no short-, medium-, or long-term gains to growth from public sector infrastructure investments. Likewise, many governments, including Canada’s, operate on the assumption that a dollar of public infrastructure investment is worth more than a dollar, in the long run, to the economy. Data suggest this is not the case—and that’s before accounting for the cost of the taxation required to fund public spending.

Even if the optimistic view of public infrastructure spending’s economic impacts were theoretically correct, problems with choice of project (which involves politics), timing, and estimates of capital costs reduce the likelihood of success, which may explain the negative empirical findings.

Taken together, this suggests that looking to discretionary public infrastructure investments as a response to economic downturns may be a poor policy choice.