The History and Development of Canada's Personal Income Tax: Zero to 50 in 100 Years 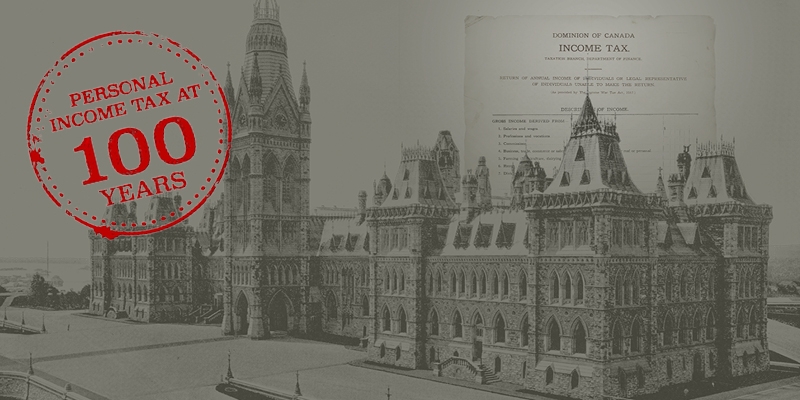 The first four essays that make up the volume start at the tax’s beginning. As William Watson argues, to historians the summer of 1917 is best known not for the income tax but for the conscription debate. For the first almost three full years of war, Robert Borden’s government had avoided introducing conscription but in 1917 finally felt obliged to enact it. In timing that was not coincidental, it announced the “War Income Tax” literally days later. With young Canadians heading to war, most people felt that richer Canadians should be forced to contribute more to the war effort. Contrary to popular mythology, the tax was not explicitly temporary. Rather, finance minister Sir Thomas White recommended only that it be reconsidered after the war.

Over the following 100 years, as a second essay by Watson describes, a handful of key federal budgets produced the PIT we know today.  Tax withholding was introduced in 1943. In 1971, J. Edgar Benson taxed capital gains for the first time, while two years later John Turner brought in full indexing of tax bracket thresholds. Base-broadening exercises (broadening the tax base to lower tax rates) failed in 1981 but succeeded in 1987.

The number of Canadians who pay personal income taxes has also risen sharply. As late as 1938, only 2.3 percent of the population filed income taxes. Now almost 75 per cent of Canadians do.

A main argument against the PIT, even with the relatively low rates and high thresholds of 1917, was that it would hurt Canada’s competitiveness. As one of the essays points out, Canada now has one of the highest top PIT rates and it kicks in at comparatively low levels of income for high-skilled workers, professionals, and entrepreneurs. Put simply, the worries of 1917 have been borne out: personal income taxes are the tax area where, globally, Canada is least competitive. This is made all the worse when one considers that Canada now taxes capital gains, which, as Herbert Grubel and Jason Clemens point out, for the first 105 years of Confederation Ottawa did not do.

Several other essays also look at the current state of the PIT. François Vaillancourt and Charles Lammam conclude that it now costs roughly $500 per household to comply with filing personal income taxes, a sum that is a much greater share of a low-income family’s budget than a higher-income family’s. Mainly, the income tax system is more costly because it is more complex. For example, an Income Tax Act that was just six pages in 1917 is now 1,412 pages. The tax form, just 23 lines long in 1917, had by 2015 grown to 328 lines. Vaillancourt and Lammam conclude that tax reform based on simplifying the tax code is long overdue.

As Bev Dahlby’s essay points out, there are also economic costs to worry about. Efficiency costs occur when beneficial activity would have been undertaken, but tax rates and rules prevent or discourage it. Dahlby’s research shows that in every province, these indirect costs now exceed the direct cost of taxation, which is simply the money we transfer to the taxing government. His provincial-level estimates are striking. The cost of raising $1 of PIT revenue exceeds $2 in all provinces, while in Quebec it exceeds $3, in Newfoundland and Labrador $4, and in Ontario almost $7. Given these costs, projects financed with PIT revenues would have to exhibit benefits of more than $7 for every $1 spent on them in order to be justifiable. The list of such projects can’t be very long.

The final three essays focus on how to get a smarter tax system embodying better incentives for work, savings, investment, and entrepreneurship. The recommendations include reducing or eliminating many of the tax credits and other privileges now embedded in the tax code in order to allow for lower, efficiency-enhancing tax rates that raise the same overall revenue. In his essay, Jack Mintz recommends replacing the PIT with a PCT, a personal consumption tax.

After 100 years of Canada’s federal personal income tax, it’s clear we need broad reform to counter many of the concerns—including complexity and lack of competitiveness—that were voiced in the original 1917 debates on the new tax.