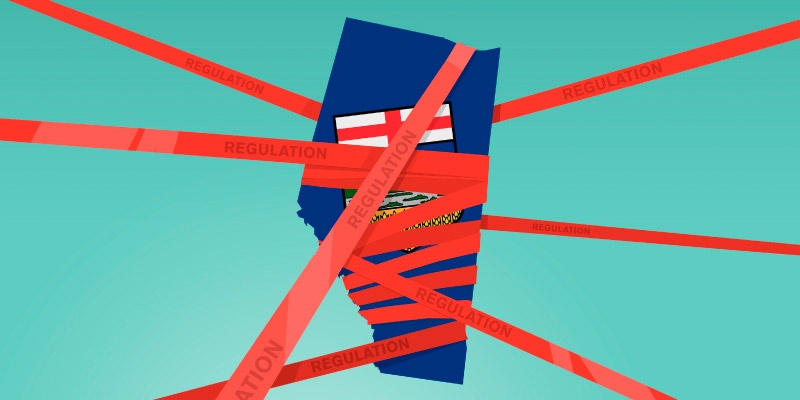 Alberta’s economy has been sorely afflicted in recent years. A major factor in that affliction was, of course, the slump in world oil prices which began their plummet in 2014. Limited pipeline capacity, which leads to Canadian oil producers getting a depressed price for Canadian oil, exacerbated Alberta’s economic woes.

A number of metrics reveal that oil and gas investment in Alberta is in steep decline. According to a report by the Canadian Association of Petroleum Producers, capital investment in Canada’s oil and natural gas in 2017 was $45 billion, which was down 44 percent from its $81 billion level in 2014, before oil prices collapsed.

But many other factors are affecting investment in Alberta besides the world oil price. For example, Alberta’s fiscal terms (the regime of lease payments, royalties, production taxes and gross revenue charges, but not corporate or personal taxes) were only considered a deterrent to investment by 14 percent of survey respondents to the Fraser Institute’s Global Petroleum Survey in 2013. That deterrence perception reached 50 percent in 2017. Respondents saying that Alberta’s fiscal terms were attractive to investment dropped by 22 percent over that same period. With regard to Alberta taxation in general, there was a similar decline in investment attractiveness from only 16 percent of respondents registering deterrence due to this factor in 2013, rising to 52 percent of respondents registering deterrence to investment in 2017.

The same is true for mining investment in Alberta. In 2013, regulatory uncertainty in Alberta was only considered a deterrent by 11 percent of respondents to the Fraser Institute’s Annual Survey of Mining Companies. After peaking at 38 percent in 2016, the percentage expressing deterrence fell to 25 percent in 2017, still more than double that from four years before.

Key factors that survey respondents perceive as deterrents to investment are all regulatory: respondents in both surveys point to uncertainty about environmental regulations and their enforcement, and the cost of regulatory compliance. This was particularly true in the oil and gas sector, where 32 percent of respondents registered compliance costs as a deterrent to investment in 2013, whereas 70 percent registered deterrence due to this factor in 2017.

There are many potential reasons for Alberta’s declining perceptions of investment attractiveness with many causal elements. Care must be taken in attributing the decline to any specific action. But sequential injections of uncertainty almost certainly played a role. Since 2014, there have been a steady stream of announcements (both provincially and federally) that have shaken the confidence investors have in their ability to both be able to invest and see to a profitable return on that investment in Alberta. The Alberta government broadened and raised the carbon tax, threw doubt on Alberta’s oil and gas royalty regime, imposed a 100Mt cap on greenhouse gas emissions from oil sands, and enacted a far-reaching Climate Leadership Plan that reaches into virtually every sector of Alberta’s economy.

This study offers several recommendations to address this regulatory cascade, including rolling back some of the recently implemented regulations and taxes. At the same time, the province should also institute regulatory reform projects like those that have been successfully implemented elsewhere in Canada. British Columbia, for instance, implemented a Regulatory Reform Initiative in 2001, with a goal of reducing regulations by requiring that any new ones must be accompanied by cutting another. New Brunswick implemented Smart Regulation, a three-point plan to reform the province’s regulatory system by reducing regulation by 20 percent overall and instituting a rule that any new regulation must displace an obsolete regulation.

Canada’s largest trading partner (and increasingly economic competitor) is leaping ahead on this front. In his first week in office, Donald Trump enacted an executive order requiring that for every new regulation issued, two must be eliminated. He also instituted what has been called a “regulator’s budget,” evaluating regulations to be replaced based on the costs and benefits of new regulations.

Alberta’s economy is reeling from a combination of lower oil and gas prices combined with a barrage of regulations and taxes on the province’s entire extractive sector. Easing the double burdens of carbon taxes and excessive regulation should be a top priority for the government of Alberta.