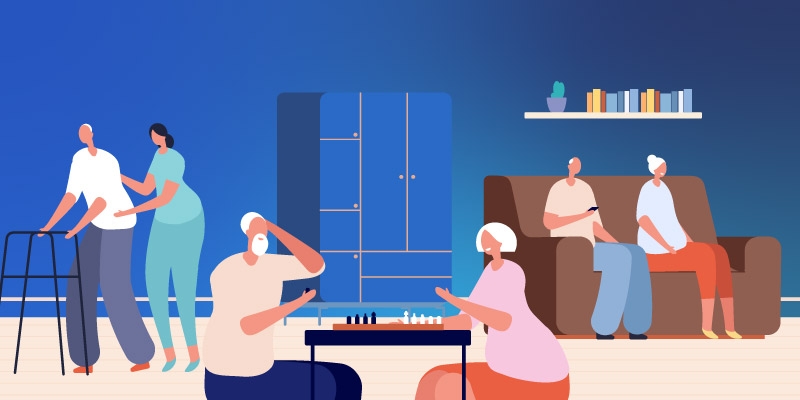 The long-term care sector in Canada has received a lot of media attention since the beginning of the COVID-19 pandemic. This is not surprising, given the tragic consequences that have affected the residents of public and private nursing homes and their families. However, the difficulties in meeting the care needs of the elderly in nursing homes or at home precede the arrival of the pandemic in the country.

For some time now, calls for the integration of long-term care into the public health systems in Canada have multiplied. Various lobby groups are calling for a substantial increase in public spending and a major overhaul of the system. Some opinion leaders have even suggested eliminating private for-profit providers, accusing them of being at the root of the many failings observed in the sector. These calls are based on the reality of an aging population, coupled with misconceptions of how other universal health-care systems include such care as part of their system.

This study has examined how four countries—Germany, Japan, the Netherlands, and Sweden—have either universalized or meaningfully reformed their universal long-term care system over time to make it financially sustainable and resilient and more adequately meet the needs of elderly. These countries with older populations are managing to integrate long-term care into their universal health-care system, while devoting a share of their GDP to health comparable to, or less than, that of Canada. They have responded to the growing concerns about the aging of their population and the financial sustainability of their public health-care system mostly by adopting a decentralized approach that efficiently leverages collaboration between the public and private sectors. There are many important policy lessons to draw from their experience.

In all four countries, patients have universal access to the long-term care and services they need regardless of their income and pre-existing health conditions. In each country, universality refers to eligibility and access to long-term care, and does not mean that care needs of elderly citizens are fully financed by governments. Indeed, patients must contribute to the financing of a non-negligible part of the costs of care through cost sharing. Costs of accommodations and meals are generally not covered by public insurance schemes. Only some patients—those with incomes below a certain threshold—receive full public funding. Cost-sharing is an integral part of these foreign health systems, and does not lead to inequitable or reduced access to needed care. Importantly, the co-payments give patients incentives to use long-term care services in a more cost-efficient manner.

These four countries have implemented reforms over time in order to leave more room for patients to choose a provider and organize their own long-term care as they see fit. At the same time, private for-profit entrepreneurs have been increasingly called upon to play a larger role in the provision of long-term care services, and have shown they could respond effectively to changes in customers’ needs and preferences. Choice and competition among care providers have been encouraged by policy makers, and have helped improve the quality of services and the efficiency with which they are delivered. Unlike the practice in Canada, care providers in these four countries are not guaranteed they will operate at full capacity, and good quality is rewarded through user choice.

In Canada, in contrast, the vast majority of long-term care is still provided in institutions. It is a well-known fact that most seniors in Canada consider institutional care a last resort and would prefer to receive care services at home if these were accessible to them. The four countries analyzed in this report have made a major shift towards home care in the last few decades. Access to institutional care in nursing homes is now reserved to people in need of permanent supervision or intensive care and treatments. These aging-in-place policies not only coincided with population preferences but also contributed to softening the impact of the population’s aging on long-term care expenditures in these countries.

In Germany and the Netherlands, in particular, a system of cash benefits has been set up to give more options to patients and to promote care delivered at home or in the community. Seniors can even hire family members or relatives and pay for the domestic help or home care with the personal allowance they receive. These cash-for-care schemes have proven to be more cost-efficient than traditional government-directed programs. Most importantly, these schemes have brought benefits to users in the form of increased autonomy and care solutions more suited to their needs and preferences.

In recent years, several Canadian provinces have adopted governance reforms, merging regional health authorities, which were meant to be autonomous intermediary bodies responsible for liaising between service providers and the population. By removing governance and decision-making power from regional health authorities and health institutions—from hospitals to nursing homes—, these reforms have led to greater centralization. This centralized approach goes against the trend observed in the four high-performing countries examined here, that have decentralized the decision-making powers to local authorities. This policy orientation is based on the notion that local managers and other actors in the field are better able to understand the specific needs and preferences of patients and the best means to address them. Canadian policy makers should consider the benefits of such decentralized approaches when attempting to reform the long-term care sector and coordinate the actions of millions of people with varying preferences and knowledge in increasingly complex health-care systems.