A Tale of Two Energy Booms 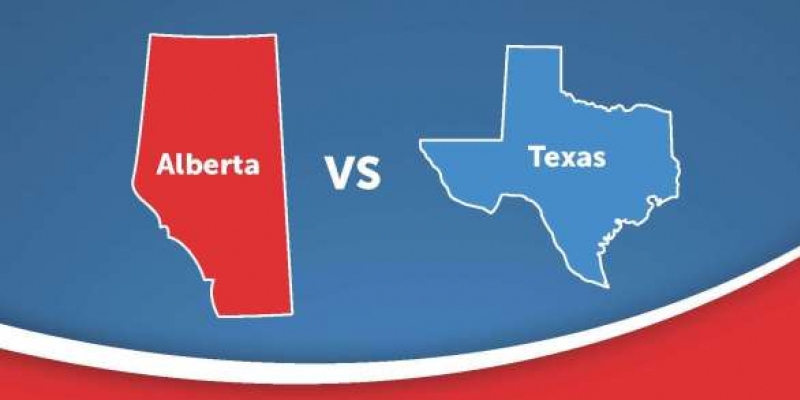 Non-renewable resource prices, especially oil prices, and associated revenues to governments have fallen significantly over recent months. This is not the first time such gyrations in oil and gas prices and then government revenues have occurred. Recent events then provide an opportunity to explore the economic and fiscal ups and downs of two jurisdictions, Alberta and Texas, both well known for their oil and gas sectors (26.8 percent of GDP in Alberta and 11.0 percent in Texas), and to compare how they performed through resource price fluctuations.

This report analyzes the economic and fiscal records of Alberta and Texas with the goal of answering two questions: Which jurisdiction performed better economically, and which performed better on fiscal measurements?

The economic records of Alberta and Texas reveal that both have experienced similar rates of real GDP growth from 2001 to 2013 (3.2 and 3.1 percent respectively, averaged annually). Texas performed better on real per-capita GDP growth (1.2 percent on an annual average, compared with Alberta’s at 0.9 percent over the period), and also does better when real GDP per worker is examined. However, by most economic measurements—total employment growth, private sector employment growth, unemployment rate, and population growth—Alberta has performed better than Texas. Also, as of 2013, Alberta had significantly higher per-capita GDP, at $75,605, compared with Texas, at $64,450 (Canadian dollars).

On balance then, Alberta has had the better economic record. That meant Alberta’s government could have had a superior fiscal record. More people employed, higher employment growth, and lower unemployment equate to more personal income taxes collected and lower demands for provincial social assistance, for example. All of that should have made balanced budgets more possible.

However, Alberta’s fiscal record has been generally poor in comparison to Texas since the year 2000. On fiscal measurements, Alberta has had significantly larger government expenditures relative to the economy (an annual average of 13.1 percent of GDP in Alberta; 9.0 percent in Texas), higher public sector employment growth (2.8 versus 1.1 percent growth on average annually), and much higher per-capita government spending on an annual average ($8,607 per person in Alberta; $4,952 per person in Texas, both figures in Canadian dollars).

Even accounting for differing responsibilities in Texas and Alberta, the growth in per-capita government spending illustrates relative Texan prudence and Albertan imprudence. Between 2000/01 and 2012/13, Alberta’s per-capita government spending rose by 69.5 percent, compared with a 59.5 percent rise in Texas. Such significantly higher expenditures and public sector employment growth meant that once resource prices declined dramatically it was more difficult for Alberta to achieve a balanced budget in comparison to Texas during and after the last recession. From 2008/09 to 2012/13, as a percentage of GDP, Texas recorded one deficit (in that first year). It has recorded a surplus in every year since. In contrast, Alberta did not record a single surplus in any of those five years.

On average, Alberta demonstrated a better fiscal record on just one important fiscal measurement: net public debt relative to GDP. However, Alberta’s fiscal position (its net assets) has been in decline since 2006/07, whereas Texas stanched the bleeding in 2010/11. Simply put, if Alberta continues to perform poorly on the other above-mentioned fiscal indicators, it is only a matter of time until that favourable indicator for Alberta—net public assets/debt—is also eventually lost to Texas.