Ford government must dramatically change course to fulfill many promises 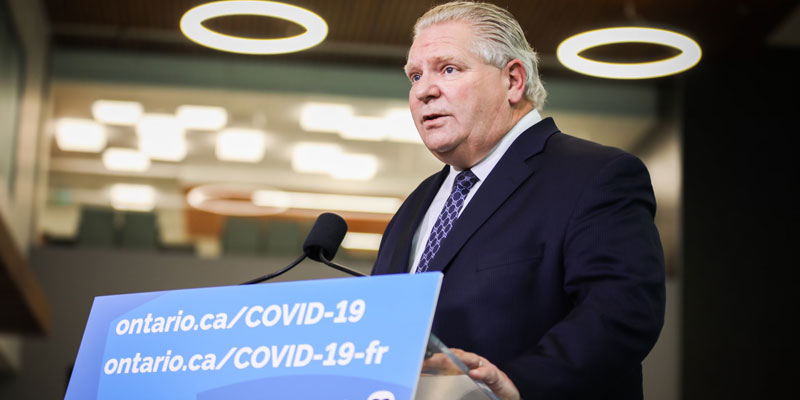 Today, the Ford government will table its budget for fiscal year 2021/22. Premier Ford’s constant refrain, especially during the election campaign three years ago, was that after 15 years of dismal economic growth under his Liberal predecessors, he would make Ontario “open for business.” But in many respects, his government has failed to deliver.

To be fair, in its early days, the Ford government repealed and amended parts of the Wynne government’s “Fair Workplaces, Better Jobs” legislation, which reduced economic opportunities for both businesses and workers by restricting contract terms. But other positive policy developments have been scant.

For example, increased electricity costs—a key reason for Ontario’s poor economic performance over the past decade (or more)—driven by government intervention and subsidies to high-cost renewable energy sources including wind. Instead of restoring market competition to lower costs, the Ford government, as economist Philip Cross documents, has continued the previous government’s policy of overpaying for renewable energy while shifting costs between ratepayers and taxpayers.

Then there’s the continuation of corporate welfare. Three years ago, Ford promised to eliminate these programs, but corporate welfare continues to flow unabated from government coffers, rewarding rent-seekers at the expense of productive businesses. And another important Ford promise—to reduce the corporate tax rate—remains unfulfilled.

He also promised—but failed—to keep spending under control to reduce the financial burden of government on the private economy. While Ford’s Progressive Conservatives railed against wasteful spending by their Liberal predecessors, after taking office they made little attempt to reduce spending. Their pre-pandemic budgeting was not quite as profligate as Liberal fiscal plans, but they didn’t reduce nominal spending. Instead, they simply took existing spending as a baseline and continued to grow it.

Next, consider the Ford government’s record on improving the business climate. Uninspiring before COVID, worse during the pandemic. Government lockdowns and restrictions on businesses in Ontario have been among the most severe in North America.

In January 2021, the Canadian Federation of Independent Business (CFIB) reported that the proportion of fully open small businesses was lower in Ontario than in any other province. And when the Ford government extended lockdowns in February, the CFIB labelled it “the least small business-friendly government in the country during the pandemic.”

Ontario’s lockdowns were not only more restrictive than anywhere else in Canada, but also unfairly discriminated against smaller businesses. For example, big box stores were allowed to sell non-essential goods instore but small retailers were not, so customers crowded into big boxes while small retailers sat empty, which seemingly made no sense—economically or from a public health perspective.

Things will surely get better for businesses when the pandemic ends, but not due to any improvement in provincial policy. According to the Ford government’s fiscal plan, even post-pandemic, provincial program spending (as a percentage of GDP) will remain substantially higher than when Ford took office in 2018. The corollary, of course, of the continued overconsumption of resources by government is an increase in scarcity for the private sector.

Finally, high spending levels increase government debt, which raises the spectre of future higher taxes and creates uncertainty about which taxes may be raised and when. This uncertainty discourages investment.

If the Ford government wants to create a more business-friendly economic environment and help spur the recovery from COVID, it should open the economy, deregulate business activity and reduce spending. The budget is a good place to start.