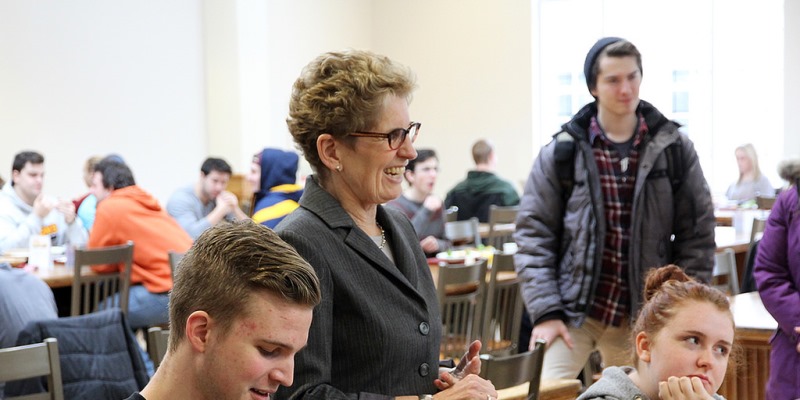 In her opening statement in the final debate before Ontario’s general election, Liberal Leader Kathleen Wynne stood by her government’s decisions with a new catchphrase—“sorry, not sorry.” She then listed policy initiatives she says are successes and not reason for contrition.

She concluded by saying “I’m really not sorry that we’re no longer asking single moms to raise a family on $11.40 per hour,” referring to her government’s decision to increase the minimum wage to $14 this year and $15 next year.

The fundamental problem, however, is that—prior to the hike—the situation she describes was a reality for only a very small number of Ontarians. Only two per cent of people working for the minimum wage in Ontario were single parents.

Which raises an obvious question. What are the typical demographic and social characteristics of Ontario’s minimum wage workers?

So if the government’s goal is to direct resources to Ontarians living in low-income households, throwing money out of a helicopter is approximately as well-targeted a strategy as raising the minimum wage.

Given these realities, it’s not surprising that empirical literature from Canada suggests raising the minimum wage has no impact on poverty rates, and in some cases, it can increase poverty.

Crucially, trying to help such a small number of low-income people with a shock to such a big chunk of the labour market creates significant unintended economic consequences that wind up hurting rather than helping people.

For many of the young people described above, a minimum wage job is a first step on the economic ladder and a source of valuable experience and skills that leads to better paying jobs. But substantial economic research suggests employers react to minimum wage hikes by hiring fewer people, cutting back work hours, and shifting to more automation. So opportunities for young people to gain experience decline—again, without any observable impact on poverty.

To be clear, helping single parents who rely on a minimum wage income is an important policy objective. But Ontario’s big increase to the minimum wage was misguided, to say the least, and we have better policy tools available.

For example, the federal Canada Workers’ Benefit (formerly the Working Income Tax Benefit) that directly tops-up the wages of low-income households, better targets assistance to those that need it without harmful unintended consequences.

Premier Wynne says “sorry, not sorry” about her government’s decision to dramatically increase the minimum wage. Unfortunately, however, the evidence suggests more young people will now hear “sorry, not hiring” from a greater number of prospective employers in Ontario.