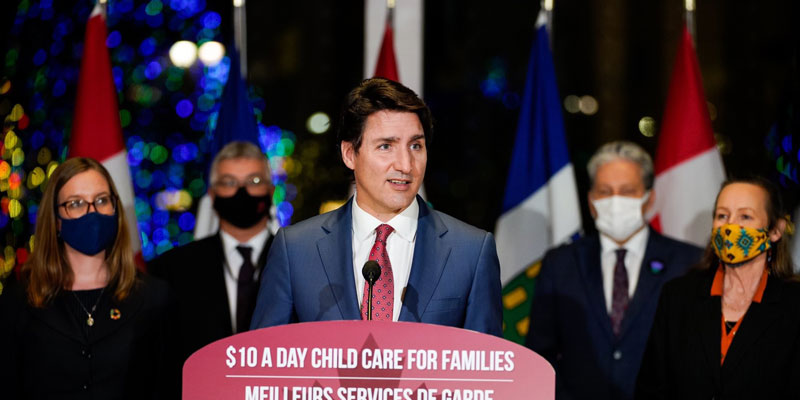 The Trudeau government’s recent throne speech, which presents the government’s main priorities, didn’t mention the words “deficit” or “debt” once but included more than 30 references to different government initiatives and programs including national daycare and a mandated energy transition. This government continues to present its historical level of spending, largely financed by borrowing, as costless to Canadians, which is dishonest.

It's first important to recognize the enormity of spending and borrowing before COVID, since it set the stage for Ottawa’s response to the pandemic. Prime Minister Harper’s last budget in 2015 projected total spending (excluding interest costs) for fiscal years 2016-17 to 2019-20 of $1.15 trillion. Actual spending under Prime Minister Trudeau was $77.0 billion higher over the four-year period. Again, these numbers were pre-COVID.

Another way to look at the spending is to compare the Trudeau Liberals’ original plan (Budget 2016) versus what actually happened. Trudeau’s first budget (2016) proposed spending to increase to $314.2 billion by 2019-20, a nearly 4 per cent increase over what the Tories proposed less than a year earlier. The actual increase was substantially larger though, with spending reaching $338.5 billion in 2019-20, some $24.3 billion higher than the original plan.

The government’s inability to control spending pre-COVID paved the way for the $600 billion-plus spent in 2020-21. Of course, some additional spending was required during the pandemic but Ottawa showed almost no discretion (or even interest) in targeting assistance to limit the amount spent and thus borrowed. According to the OECD, Canada (including federal, provincial and local governments) had the third-largest deficit as a share of the economy in 2020 among the 26 industrialized countries with available data. Ottawa incurred most of that deficit. One conservative estimate concluded that up to $22.3 billion—or more than one-in-four dollars of federal aid spending—was poorly targeted.

Another way to think about Ottawa’s spending spree is to examine per-person spending over time, adjusting for inflation. Non-COVID federal spending in 2020-21, the fiscal year that just ended, totalled $11,165 per Canadian—22.0 per cent higher than during the global financial crisis in 2008-09 and 41.2 per cent higher than peak spending during the Second World War. When COVID-related spending is added, per-person spending reached $17,121 in 2020-21.

While Canadians wait for Budget 2022, significant spending is expected on a host of programs, which will all be financed by yet more borrowing and perhaps some targeted tax increases. The national debt is now expected to reach $2 trillion by 2025-26, which could actually be an optimistic estimate given Canada’s aging population and poor government policies that continue to hinder recovery.

Meanwhile, Prime Minister Trudeau and Minister of Finance Chrystia Freeland continue to present all this spending as if it’s costless. When pressed on the marked increased in government debt, they almost always describe the spending as investments rather than just spending and point to historically low interest costs, which is somewhat convenient given that the Bank of Canada is financing almost all of the government’s borrowing. It’s not hard to imagine rates going up as Ottawa is eventually forced to finance its debt on the open market.

Moreover, the government seems to ignore the fact that debt has costs. Research has consistently shown that as government debt increases, the real interest costs incurred also increases since the risk associated with such debt is increasing. A recent analysis concluded that even using fairly optimistic assumptions—such as no recession for the next 50 years—Canadians between the ages of 16 and 80 would incur $10,498 in additional taxes (on average, over their lifetimes) from higher interest costs due to the projected debt accumulation between 2019 and 2025.

Current spending must be paid either by taxes today or tomorrow when financed by debt. Yet the Trudeau government continues to obfuscate the ultimate costs Canadians will bear in the form of higher taxes from today’s new spending and more spending planned for the future. The government should honestly engage Canadians about the tradeoff between higher spending and the need for higher taxes so Canadians can make a more informed assessment of this government’s policies.