In a recent study, we tracked the total tax bill of the average Canadian family from 1961 to 2015.

For 2015, we estimate that the average Canadian family (including single Canadians) earned $80,593 in income and paid $34,154 in total taxes (income taxes, payroll taxes, sales taxes, property taxes, etc.). That’s 42.4 per cent of income going to taxes—more than the 37.6 per cent that goes to food, clothing, and shelter combined. All told, Canadian families spend more on taxes than the basic necessities of life.

Times have certainly changed. Back in 1961, the first year we have calculations, the average family paid 33.5 per cent its household income in taxes while spending 56.5 per cent on basic necessities.

In fact, since 1961, the total tax bill increased by 1,939 per cent, dwarfing increases in shelter costs (1,425 per cent), clothing (746 per cent), and food (645 per cent). Even after accounting for inflation (the change in overall prices), the tax bill shot up 152.9 per cent over the period, to now consume more income than any other single family expense. 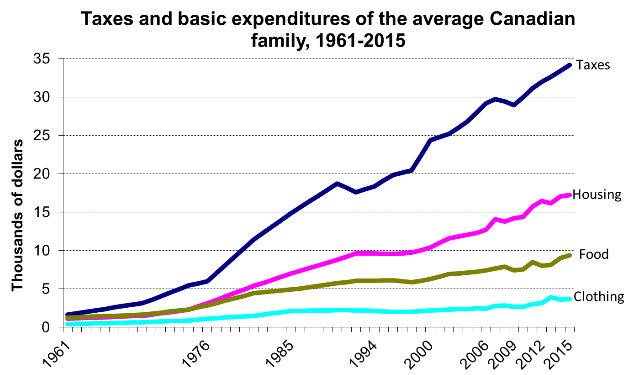 Of course, taxes are necessary—they help fund important government services. The issue is the amount of taxes governments take compared to what we get in return. With more than 42 per cent of income going to taxes, Canadians might wonder whether they’re getting the best value for their tax dollars.

That’s for individual Canadians and their families to decide.

But to make an informed assessment, you must have a complete understanding of all the taxes you pay. Unfortunately, it’s complicated because different levels of government levy such a wide range of taxes, with many taxes buried in consumer prices. Therein lies the value of our calculations.

An informed citizenry can hold government more accountable for the money it spends and continue a public debate about the overall tax burden and whether we’re getting our money’s worth. With Canadian families spending more on taxes than basic necessities, it’s a debate worth having.