As 2018 begins, much of the discussion on the economic challenges facing Canada will focus on the continuing negotiations with the United States regarding NAFTA and the impact of U.S. corporate and personal tax changes on our tax competitiveness.

Both of these areas in the end will have their greatest impact on new business investment in Canada.

Boosting our rates of capital formation remains a perennial economic challenge, and the situation is all the more serious given that our long-term performance in this area has been lagging when one looks at the growth rates of spending on business investment.

The first chart below presents the annualized growth rates of quarterly real Canadian business gross fixed capital formation (in 2007 constant dollars) for the period 1961 to 2017. The growth rates are calculated from data obtained from Statistics Canada (Table 380-0064) and are for investment in both residential structures and non-residential structures, machinery and equipment. 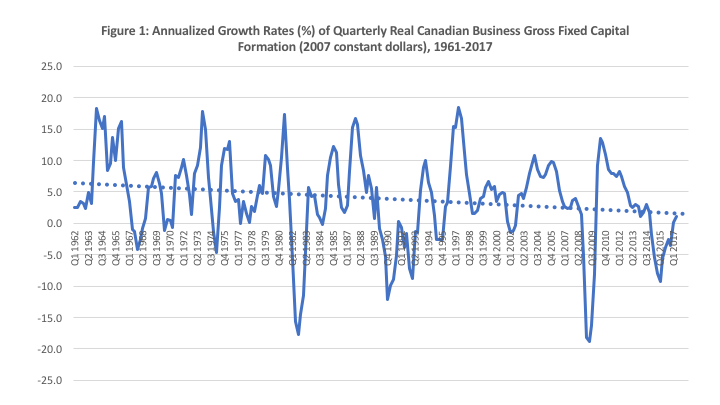 Whereas the average annual growth rates in the 1960s, 1970s and 1980s were all above 4 per cent, since the 1990s they have averaged below 3 per cent. Indeed, when a linear trend is fitted to the data in the above chart, they show a negative trend. While there are indeed peaks and valleys to the data in the chart, the long-term performance has been of declining growth rates for overall capital formation. The downward trend is even more pronounced when residential capital formation is removed from the picture, as illustrated in the second chart below. 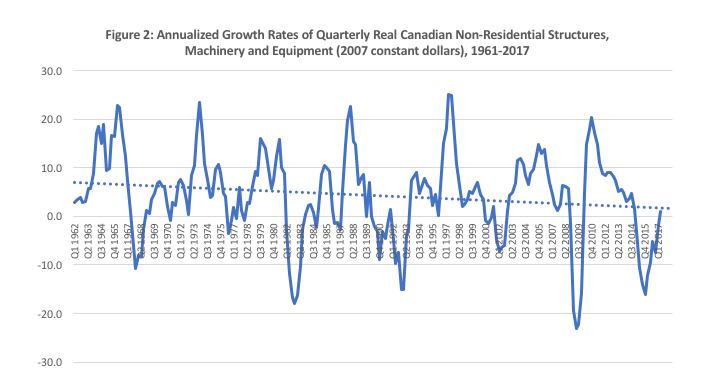 Canada needs to boost its growth rates in private-sector capital formation particularly in the areas most crucial to boosting productivity in our manufacturing, natural resource and transportation sector given much of our transport capacity is geared towards shipping manufacturing and resource products.

When you combine recent business tax changes at the federal level with the business effects of changes at the provincial level involving labour costs (such as large increases in the minimum wage), then add the prospects for diminished access to the U.S. market and a more tax competitive U.S. business sector, the potential for a more diminished Canadian capital formation environment is huge.