Canada’s evolving federal fiscal balance: How big will the deficit be?

What a difference a year makes. Over the course of the past 12 months, the federal government’s projected fiscal balance for 2016/17 has evolved from a surplus to what could now be a fairly large deficit.

Indeed, Canadians started 2015 with the federal government projecting a $4.3 billion surplus for 2016/17 in its November 2014 fiscal update. Then, in April’s 2015 budget, the government reduced the projected surplus to $1.7 billion.

Last month’s fiscal update saw this small projected surplus turn into a $3.9 billion deficit. Importantly, this change in the federal government’s projected fiscal balance did not include any adjustments for the election spending promises of the recently elected Liberals, who campaigned on increasing spending and running a $9.9 billion deficit in 2016/17.

This week, the Liberals seem to have backed away from this maximum deficit commitment as recent media reports suggest their focus will be on reducing the government’s debt-to-GDP ratio each year while in power.

But the reality is that this will allow the federal government to run much larger deficits than the $10 billion the Liberals initially promised. In fact, at the top end, this could mean a deficit approaching $25 billion next year, which would enable the government to still reduce its ratio of accumulated deficit to GDP, albeit slightly. 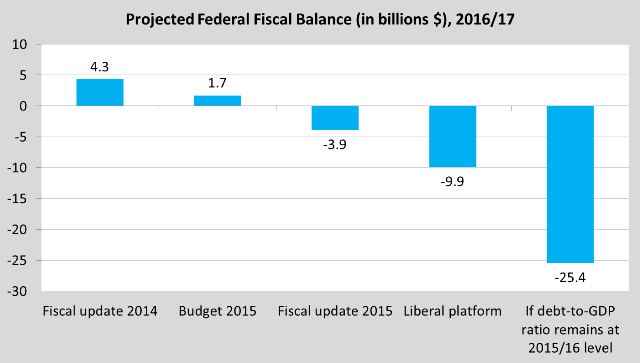 This development raises several potential problems. For starters, it is yet another move away from the Chretien consensus regarding balanced budgets. In addition, running large and growing deficits in relatively good times puts the country’s finances at risk should the economy experience a slowdown or recession. Indeed, we saw such a scenario unfold in the 1970s, 1980s and early 1990s when the federal government ran 27 consecutive deficits. These deficits hampered Canada’s ability to enact competitive tax policies and led to a dramatic accumulation of debt, with interest payments on the debt consuming more than one-third of federal revenues. Lastly, the resulting debt will need to be serviced and eventually paid off by Canadians through taxes in future years, displacing important public priorities.

The ultimate question is: how big will the federal deficit be next year? For that, we will have to await next year’s budget.