The Institute recently released a study that calculated rates of return (nominal and real) received by Canadian retirees from the Canada Pension Plan (CPP). One of the main reasons for the study was to clarify the difference between returns earned by the investment arm of the CPP (Canada Pension Plan Investment Board) and the actual returns received by retirees in the form of CPP retirement benefits.

One of the near-constant questions received during media related to generational equity. While not a focus of the study, the results clearly show a marked generational gap in the benefits received from the CPP depending on when a person was born. 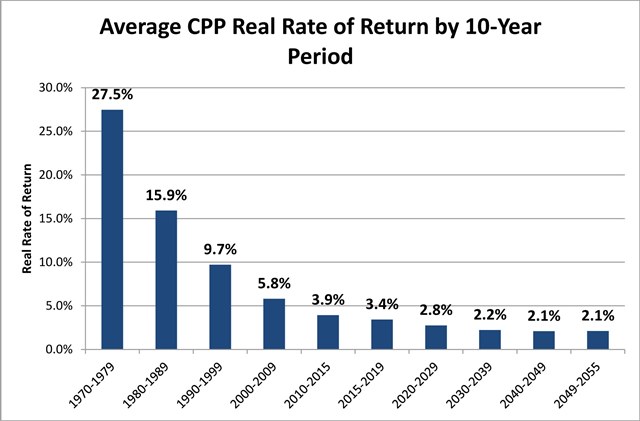 The figure above shows the average rate of return (adjusted for inflation) for 10-year periods starting in 1970. The time periods represent when people retired. Thus, the 1970-1979 time period includes Canadians born between 1905 and 1914. The analysis assumes people retired when they reached 65 years of age.

There is a pronounced decline in the returns in the very next time period. The average rate of return for those retiring in 1980-1989 was 15.9 per cent, almost half the rate of the previous period.

There are two principal reasons for the marked declines in the rates of return. First, retirees in the early periods paid into the CPP over a shorter time period compared to younger Canadians. Second, the contribution rate (i.e. tax) has increased from 3.6 per cent when the CPP was launched in 1966 to its current level of 9.9 per cent.