British Columbia’s provincial budget (released yesterday) announced a tax cut for small businesses, which is being billed as part of the government’s plan to “help businesses create jobs, grow and compete.”

While tax cuts can often be a tool for encouraging businesses to grow, this specific tax cut is problematic. In fact, the proposed reduction in the small business tax rate may actually discourage some businesses from growing.

This is because cutting the small business rate will reinforce an existing problem in the province’s tax system. Under the province’s current tax system, a business is taxed at a rate of 2.5 per cent for the first $500,000 of net income. Above this threshold, business net income is taxed at the general corporate tax rate of 11 per cent. Research suggests that the gap between the small business and general corporate tax rate can discourage businesses from expanding and perhaps hiring more workers.

And the government is proposing to widen the gap by reducing the small business rate from 2.5 to 2.0 per cent, effective April 1 this year. For a business that steps over the $500,000 threshold, that means every extra dollar of net income earned will be taxed at a rate that is five and half times the small business rate. From the perspective of business owners, the tax structure adds to the cost of growing the business, possibly making expansion a less worthwhile endeavor. 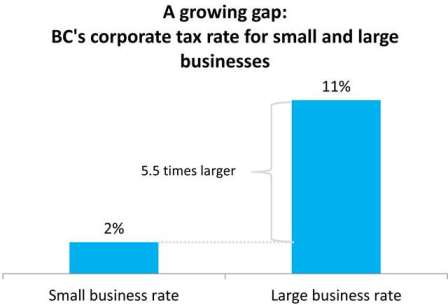 As University of Calgary professor Jack Mintz points out, another problem with a large gap between the small and large business corporate tax rate is that it encourages companies to breakup or reorganize into smaller businesses to take advantage of the lower rate. This could be a problem for two reasons. The first is that it means business owners are paying higher administrative costs to lawyers, accountants and financial planners to help avoid taxes, leaving fewer resources available for business development and expansion.

The second reason is that larger businesses can take advantage of “economies of scale,” which allow businesses to save costs as they produce more. In other words, the gap between the small business and general corporate tax rate could encourage businesses to be less efficient. Ultimately, that would mean a less prosperous society as more resources have to be used to produce the same amount of goods.

The government’s goal of encouraging business growth through tax reduction is generally positive. However, a more effective policy would have been to cut the general corporate tax rate or at the very least increase the threshold of income eligible for the small business rate, mitigating the disincentive for business growth.

Indeed, another proposal in the budget to reduce business costs by exempting electricity from the PST is at the very least a step in the right direction (albeit a tepid one). But reducing the small business tax could have the opposite effect and discourage small businesses from growing.