Demand for independent schooling on the rise in Canada

Across Canada, more and more parents are choosing independent schools for their children. Increasing demand for options outside of the public school system is an important trend with significant implications for education policy.

First, consider the numbers. Across Canada, between 2000/01 and 2012/13, independent school enrolment increased in every province except P.E.I. and New Brunswick where there was a very slight decline. In many cases, the increases were significant. In British Columbia, Alberta, Saskatchewan and Newfoundland, independent school enrolment grew by 24-34 per cent over this short period. What makes these increases all the more remarkable is that they occurred during a 13-year period when Canada’s school-age population shrank significantly. In fact, the total school-age population shrank in every province except Alberta during this timeframe. 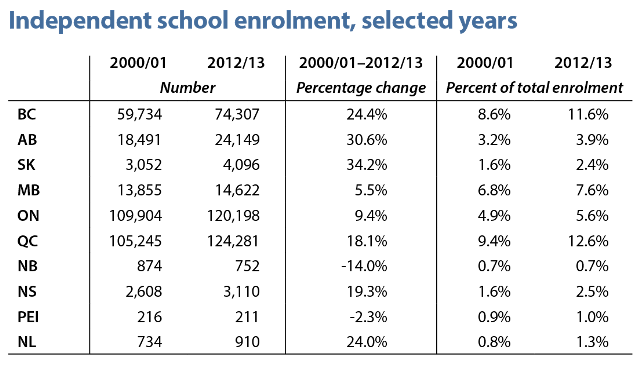 Across Canada, demand for independent education is clearly rising, but this table suggests that the provinces differ in terms of the extent they are helping parents meet this demand.

Public policy plays an important role. For example, in each of the three provinces with the highest rates of independent school enrolment (Quebec, B.C. and Manitoba), independent schools receive some amount of funding from their provincial governments for each student they educate.

It’s time for Ontario and the Atlantic provinces to look at provinces like B.C. and Quebec for alternative approaches to funding education. Not only are these provinces responsive to demand for more choice, they relieve budget pressure on their provincial governments.

In the end, perhaps it’s possible to satisfy both parents and taxpayers. We just need to start paying more attention to what the numbers tell us: parents across Canada want access to a wider range of schooling options, and opening access to these options requires less of the taxpayer.