During the energy boom, Alberta was a job magnet for Canadians

In the years prior to the recent recession, strong economic growth in Alberta helped drive the national economy and enhanced the fiscal health of the federal government.

The province is a major net contributor to federal finances—between 2007 and 2015, Alberta sent $221.4 billion more to Ottawa than it received in the form of federal transfers and programs (including CPP).

But there are other aspects of Alberta’s economic contribution to the country that, while perhaps less obvious, are also important. One such area where the province has been an understated benefit to the country is as a source of employment opportunity.

In a recent study that catalogued a number of the key economic benefits Alberta provides the country, the Fraser Institute examined the province’s role as a job creator. It found that in recent years, Alberta far outstripped the rest of Canada in its ability to create jobs and provided employment opportunities that benefitted Canadians from all across the country.

In the decade between 2004 and 2014, Alberta posted the highest average rate of private-sector job growth of any province. As shown in the chart below, private-sector employment during the period grew by an average of 2.7 per cent per year in Alberta, more than double the Canadian average of 1 per cent. 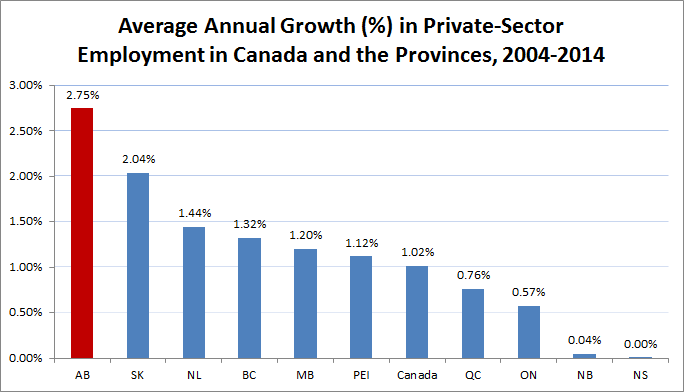 Alberta’s high rate of job growth means that, between 2004 and 2014, it was responsible for roughly 32 per cent of all new private-sector jobs created in Canada. That’s far more jobs than any other province was able to create during that time period. Ontario and Quebec, for instance, both of whom have much larger populations than Alberta, were responsible for just 22 and 17 per cent of new jobs respectively.

And while Albertans stand to benefit the most from high job-creation in their province, the data shows that plenty of other Canadians were able to take advantage of Alberta’s employment opportunities, too. According to interprovincial migration figures for 2004 to 2014, 270,926 more Canadians came to Alberta from other provinces during this period than left Alberta for another part of Canada. Clearly, Alberta was a popular choice for Canadians looking for economic opportunities outside their home province. This means that a large number of Canadians, not just Albertans, were able to seize the employment opportunities that Alberta’s booming economy provided.

It’s important to understand the employment opportunities that Alberta’s job growth provided for Canadians in order to grasp the full scope of the province’s contribution to the national economy. Alberta’s value for the country isn’t only a matter of how many tax dollars it sends to Ottawa. It can also be measured by the employment opportunities it provides for Albertans as well as other Canadians migrating in search of better economic conditions for their families.