Ontario’s economy has experienced more than its share of economic pain in recent years. That pain, however, has not been spread evenly around the province. Some regions have been hit harder than others.

That’s why we recently published a study, which divides the province into five large regions and analyzes labour market performance in each in the years during and since the 2008/09 recession. This series of blogs spotlights specific regions that have had particularly weak economic recoveries since the great recession, including eastern Ontario.

We define eastern Ontario as including the Kingston-Pembroke and Muskoka-Kawarthas region of the province. We exclude Ottawa, which is treated as its own solitude because of its population density and the unique features of its local economy.

One of the most important features of eastern Ontario is a demographic one—it has the largest share of citizens over the age of 64 than any other region of Ontario. The chart below demonstrates this fact. Whereas across Ontario 16 per cent of the population is aged 65 or older, in eastern Ontario that figure is 21.9 per cent. 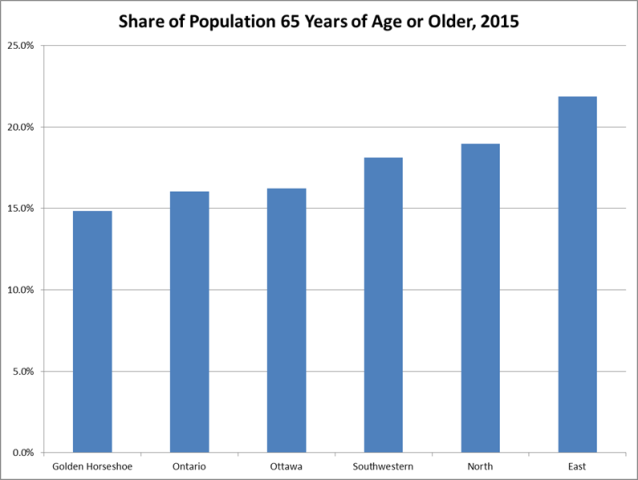 This demographic fact about eastern Ontario has important implications for the region’s labour market. It is, for example, an important reason why the region’s labour force participation rates and overall employment rates are consistently below the provincial average. The second chart demonstrates this fact, charting employment rates in each region between 2010 and 2015. 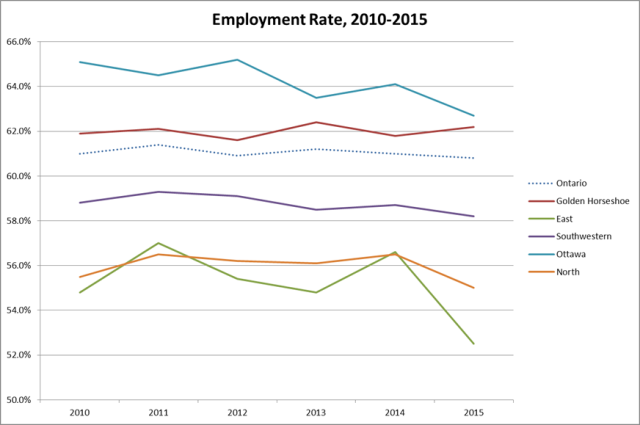 Eastern Ontario’s has been one of the weaker-performing labour markets in Ontario in the years during and since the 2008/09 recession. The economy of the region was hit hard by the recession of 2008-09, and in the years since there has been little economic recovery. In fact, between 2010 and 2015, the years of Ontario’s economic “recovery” from the recession, average annual employment growth in eastern Ontario has actually been negative at -0.6 per cent.

In analyzing the economy of Ontario, it’s important to recognize that the province’s regions are very different, with unique economic and demographic factors. This analysis shows that eastern Ontario has experienced more than its share of economic pain within Ontario over the past decade and, as a result, employment levels in 2015 still had not recovered to pre-recession levels.