Since coming into office, Prime Minister Justin Trudeau’s government has markedly increased spending, contributing to larger-than-promised budget deficits with no end in sight. Next week’s federal budget is an opportunity to change course.

Consider the government’s spending record thus far. It has increased program spending from $253.9 billion in 2014/15—the last full year the previous government held office—to a projected $304.9 billion this year (2017/18). This $51 billion increase in spending represents total growth of 20.1 per cent in just three years.

Annual spending growth by the Trudeau government has also dwarfed growth in revenue (3.3 per cent), inflation plus population growth (2.7 per cent), and growth in nominal GDP (2.6 per cent) (see chart below). 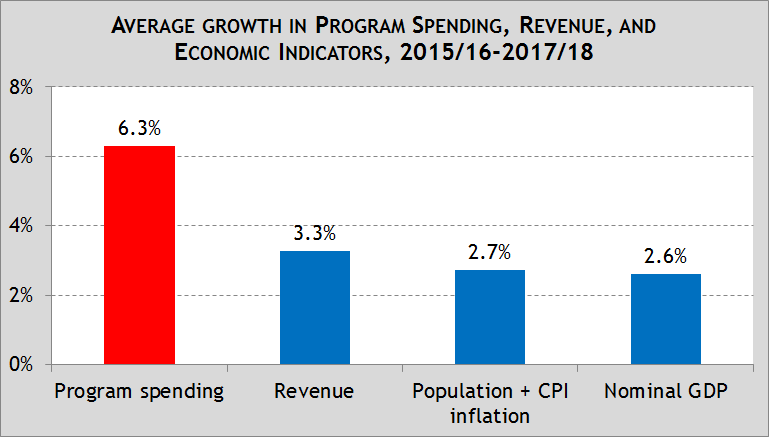 The government’s current fiscal plan is to moderate the growth of spending in the remaining years of its mandate. For 2018/19 and 2019/20, it plans to increase spending at an annual rate of 2.3 per cent. But that moderation is still not enough to balance the budget by the end of the mandate (2019/20)—something Prime Minister Trudeau promised to do in the 2015 election campaign.

To keep this promise, the government must change fiscal course in the years to come. Specifically, to balance the budget by 2019/20, it must reduce program spending by 1 per cent over the next two years or 0.5 per cent in each year—a modest adjustment given the marked 20 per cent growth in spending in the initial years in office.

Simply put, next week’s budget is an opportunity for the government change its big spending ways and keep the balanced budget promise made to Canadians.