When unveiling today’s federal fiscal update, Finance Minister Bill Morneau (pictured above, with the prime minister) touted higher than expected economic growth for 2017 as a success story for the Trudeau government. As he told the House of Commons, economic growth is “the highest we’ve seen in a decade… not only is our plan working, it’s working better than expected.”

In reality, this year’s stronger-than-expected economic growth has little to do with any actions taken by the federal government. Moreover, the update itself shows that the uptick is temporary as growth is expected to moderate dramatically starting next year.

Canadians should understand that the improvement in the economy in 2017 is largely grounded in the rebounding of commodity prices—in fact, nearly 40 per cent of second quarter growth came directly from the energy sector.

In addition, there has been a buildup of auto inventories in the U.S., which helped boost exports in the first half of 2017. According to Statistics Canada’s former chief economic analyst, this is a short-term effect due to planned cuts to production and not an anticipation of higher auto demand. Government policy is not the reason.

And while Minister Morneau touts that the Canada Child Benefit has helped stoke consumer spending, the Bank of Canada recently noted that this government transfer amounts to a one-time boost rather than a long-term driver of economic growth.

Even Morneau’s update shows the uptick in growth for 2017 is not expected to persist. The chart below displays GDP growth projections (inflation-adjusted) taken from the update. These projections form the basis of the government’s fiscal plan. 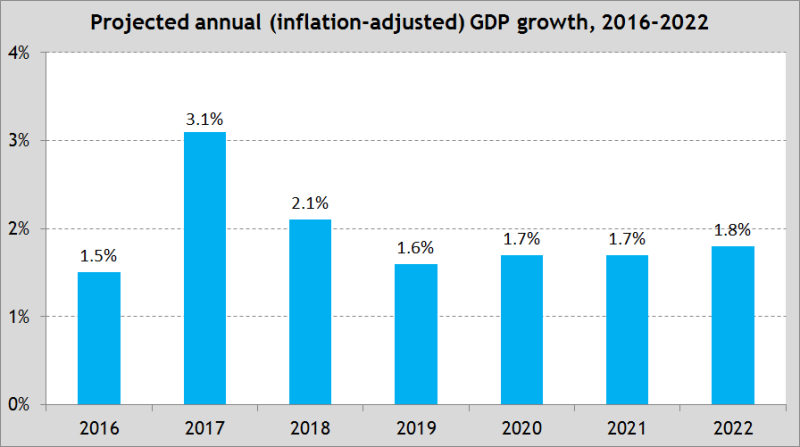 While growth is expected to jump to 3.1 per cent this year, it’s not expected to be as rosy in subsequent years. Growth is projected to drop to 2.1 per cent in 2018 and fall further thereafter to annual rates between 1.6 and 1.8 per cent. Put differently, the growth rate in 2017 is a one-time blip as future economic growth is expected to generally drop below 2 per cent. These low-growth estimates are consistent with projections from the Department of Finance and the Bank of Canada.

Put simply, one would be hard-pressed to conclude that growth expectations are proof that the government’s economic plan is working. Clearly, Canadians and policymakers should not be complacent about the medium and long-term challenges facing our economy.