Minister McKenna wrong on relationship between carbon taxes and growth 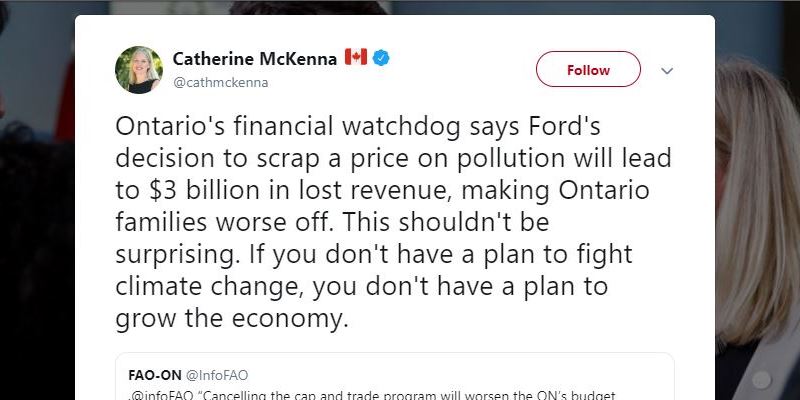 Recently, federal Minister of Environment and Climate Change Catherine McKenna took to twitter to criticize the Ontario government’s decision to scrap its cap and trade program.

The first sentence in the minister’s tweet is debateable. The last is flatly misleading. Let’s take them in turn.

The minister starts by referring to a recent report from Ontario’s Financial Accountability Office which showed that the Ford government’s decision to scrap cap and trade in Ontario will lead to $3 billion less revenue for the provincial government over the next few years. This much is true. The second part of the sentence, however, that Ontario families will therefore be made worse off is highly debateable. It’s important to recognize that the money that won’t be flowing into provincial government coffers each year isn’t going to be tossed into a big bonfire. It will instead remain in the pockets and accounts of Ontario households and businesses.

Depending on their values and policy preferences a person might think that putting this money in the hands of government will make Ontario households better off than leaving it in the private economy, but it is certainly a contestable point and not nearly as clear cut as the minister’s tweet seems to suggest.

The problem is that there is no support for the claim that the federal government’s plan to impose a nation-wide $50 per tonne carbon tax will be a major contributor to economic growth – let alone that it or some similar policy constitutes a necessary condition for growth. In fact, quite the opposite – evidence from Canada strongly suggests implementing carbon pricing will slow down, not speed up, the rate of growth in Canada holding all else equal.

Take this report from Canada’s Ecofiscal Commission, one of the leading organizational proponents of carbon pricing in Canada. The study finds that no matter how you slice it, the introduction of a carbon price in Canada means a slowdown in the rate of economic growth relative to no new action on emissions. The report does show that this slowdown can be mitigated by making the most economically efficient choices for recycling the revenue from carbon pricing (which would be using it to cut corporate taxes), but the directional effect is still downward. What’s more, historical evidence from Canada suggests governments are unlikely to actually employ the most economically efficient revenue recycling options, choosing instead to use the money to issue rebates that don’t influence economic incentives and/or to fund green initiatives. These choices further increase the economic harm caused by carbon pricing compared to if the money were used to reduce other economically harmful taxes.

Of course, none of this is to say that moderate carbon pricing is inconsistent with economic growth in Canada, but the minister’s suggestion that it is necessary for growth or more specifically that it’s impossible to have a viable economic growth strategy that doesn’t include a robust policy to reduce emissions is simply wrong.

Politicians and commentators often take heat when they say things that are flatly wrong about the science that should inform climate change policy – such as when they say that there is no clear evidence of anthropogenic global warming. They should be held to the same standard when they say comparably wrong and (I’m sure accidentally) misleading things about the economics surrounding climate policy. Minister McKenna was wrong to imply that policy action on emissions is a necessary condition for economic growth in Canada. Regardless of one’s final position on the wisdom of the policy, our economy can grow with or without a carbon price and the preponderance of evidence actually suggests it will grow faster without one. Given Minister McKenna’s position and stature and the weight attached by so many to her words she should correct the record on this point.