In 2015, Premier Notley’s incoming NDP government found itself at a crossroads when it came to handling Alberta’s deteriorating public finances.

As detailed by a Fraser Institute study from that year, various past provincial NDP governments chose very different models of fiscal management when faced with similar difficulties. It was therefore not certain which of these possible models the new Notley government would adopt in an effort to eliminate the large budget deficit it inherited.

Notley could follow the 1990s model of Roy Romanow from Saskatchewan, who cut the province’s program spending, erased its budget deficits in three years and significantly reduced its public debt. Or it could opt for the approach of Bob Rae in Ontario during the same decade, who responded to an economic downturn in his province by rapidly increasing program spending, prompting a long string of large budget deficits.

Again, while Romanow’s approach led to the quick elimination of the provincial budget deficit, the Rae government’s strategy contributed to a string of large deficits and a rapid run-up in debt. Predictably, the Notley government’s decision to follow the Rae blueprint on spending is producing similar fiscal outcomes.

As they did in Rae’s Ontario, the rapid increases in spending have contributed to the size of a series of large deficits in Alberta and a substantial increase in provincial debt. The chart below compares the provincial budget balances (deficits or surpluses) as a share of provincial GDP for three NDP governments: Alberta’s Notley government from 2015-2019, Ontario’s Rae government from 1990-1994, and Saskatchewan’s Romanow government from 1991-1995. 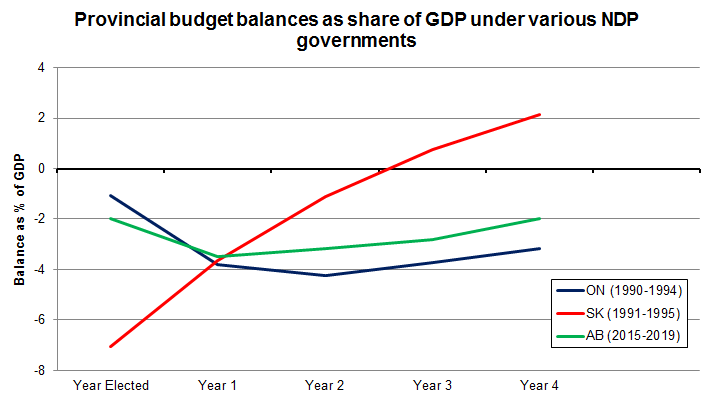 As the above chart shows, under the Notley government, Alberta’s deficit grew from 2 per cent of its GDP in 2015/16 to 3.2 per cent in 2017/18. The overall trajectory of its budget balance closely resembles that of Ontario during the Rae government.

The results achieved under the Romanow government, on the other hand, could not be more different. While both the Notley and Rae governments slipped into deeper deficit spending in their early years, Romanow managed to completely eliminate Saskatchewan’s dangerously large deficit in just three years. While many factors can influence budget deficits, it’s clear that Saskatchewan’s more prudent spending choices were an important contributor to the province’s rapid deficit elimination.

The Notley government’s decision to follow the Rae government’s example and rapidly increase its spending has exacerbated the fiscal problems it inherited and contributed to the deficit growing rather than shrinking. The consequence of several large consecutive deficits will be rapid growth in Alberta’s debt burden. By the end of the Notley government’s fiscal plan in 2019/20, the province expects its net debt to reach $48 billion—despite the province being “net debt free” as recently as 2015/16.

Clearly, the Notley government’s fiscal outcomes are more reminiscent of the Rae government than the Romanow government. As was the case in Ontario, the consequences of this development will be felt by Albertans for many years to come.