It’s widely known that Ontario’s economy has experienced more than its share of economic pain in recent years. That pain, however, has not been spread evenly around the province. Some regions have been hit harder than others.

Our recent study divided the province into five large regions and analyzed labour market performance in the years during and since the 2008/09 recession. This series of blog posts spotlights specific regions that have had particularly weak economic recoveries since the great recession. This blog spotlights developments in southwestern Ontario. We define this large region as including the economic region of London, along with Windsor-Sarnia and the Stratford-Bruce Peninsula region.

Southwestern Ontario’s economy is unique in a number of important respects. Perhaps of greatest importance, despite the job losses of the 2008/09 recession, it still relies on the manufacturing sector as a major employer to a greater extent than any other region of the province. The first chart below shows manufacturing employment as a share of total employment in all five regions of the province in 2015. It shows that 16.3 per cent of all jobs in southwestern Ontario are in the manufacturing sector, compared to 10.8 per cent in the province as a whole. 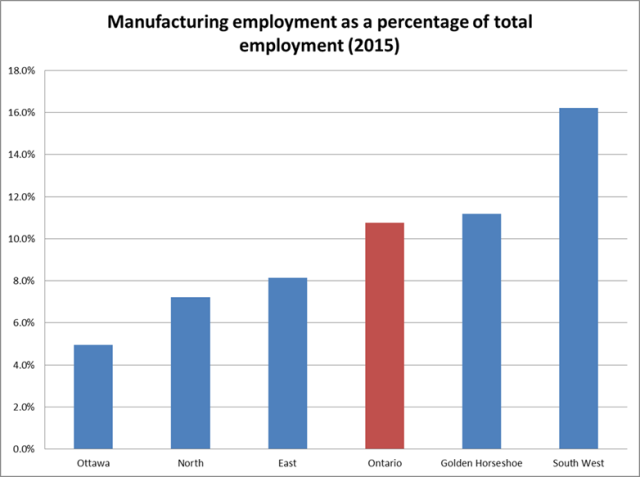 The economy of southwestern Ontario has other distinctive features, including a larger agricultural sector than most other parts of the province and fewer jobs in certain white collar industries (finance, insurance, real estate, for example) than the provincial average.

Partly due to its large manufacturing base, southwestern Ontario was hit harder than any other region by the Great Recession, as employment fell by five per cent and the unemployment rate jumped more than three percentage points in just one year.

Unfortunately, in the years following the recession the region’s economic recovery has been quite tepid considering the severity of the recession itself. In fact, employment growth in the region has averaged just 0.4 per cent annually between 2010 and 2015. Due to the steep recession and this tepid recovery, as of 2015, southwestern Ontario still had not recovered to pre-recession employment levels. 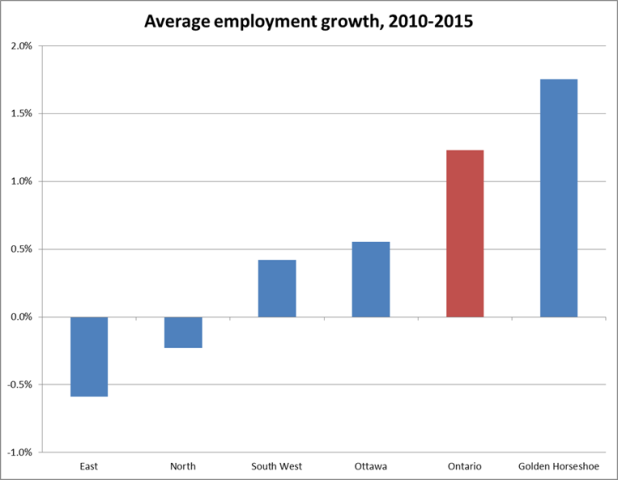 This second chart above demonstrates that although Ontario’s overall economic record has been nothing to write home about in recent years, the economic challenges in southwestern Ontario are particularly severe.