As Canada celebrates its 150th birthday, it’s worthwhile to retrospectively look at the spending records of the country’s various prime ministers. The following blog discusses some important aspects of our recently released study documenting the per person level of federal spending from 1870 to 2017.

This post (and the underlying study) focuses on program spending only, which excludes interest costs on government debt, adjusted for inflation and by population.

A critical part of the analysis (summarized in Table 2 of the study) was the determination of which prime minister was allocated responsibility for individual budgets, particularly in years when changes in government occurred. For example, the study allocates the 1873-74 budget to Alexander Mackenzie rather than Sir John A. Macdonald (even though the latter started the fiscal year as prime minister) because Mackenzie won the November 1873 election, which meant that a majority of the fiscal year occurred within his tenure.

Some of the key findings of this analysis may be surprising to people:

• The expected level of per person spending this current fiscal year (2017-18) under Prime Minister Justin Trudeau is $8,337, which is just $38 less than the all-time high level achieved by the Harper government in 2009. It’s worthwhile to note that the spending in 2009-10 occurred during the depths of the global recession while no such external event is affecting spending for Prime Minister Trudeau.

• Much of the variation in per person spending for the prime ministers during and before the Second World War are connected with wartime expenditures, the Great Depression, large-scale infrastructure spending as the nation developed, and the initial creation and development of the country’s federal government.

• Of all the prime ministers, Sir Robert Borden ranks highest with an average annual increase in per person spending of 12.8 per cent. This result is linked to the wartime spending undertaken in connection with Canada’s role in the First World War.

• The second highest ranking prime minister in terms of the average annual changes to per person spending was William Lyon Mackenzie King. Prime Minister Mackenzie King’s second term as prime minister (1935 to 1948) was heavily influenced by both the Great Depression and the Second World War.

• In terms of post-Second World War prime ministers, Prime Minister Louis St. Laurent records the largest annual average increase in per person spending at 7.0 percent, though his spending was to some extent influenced by the Korean War.

• Prime Minister Joe Clark records the largest average annual decline in per person spending (post-Second World War) of 4.8 percent though as noted he served for less than a year as prime minister.

• Both prime ministers Brian Mulroney and Jean Chretien record average annual declines of 0.3 per cent in per person spending. 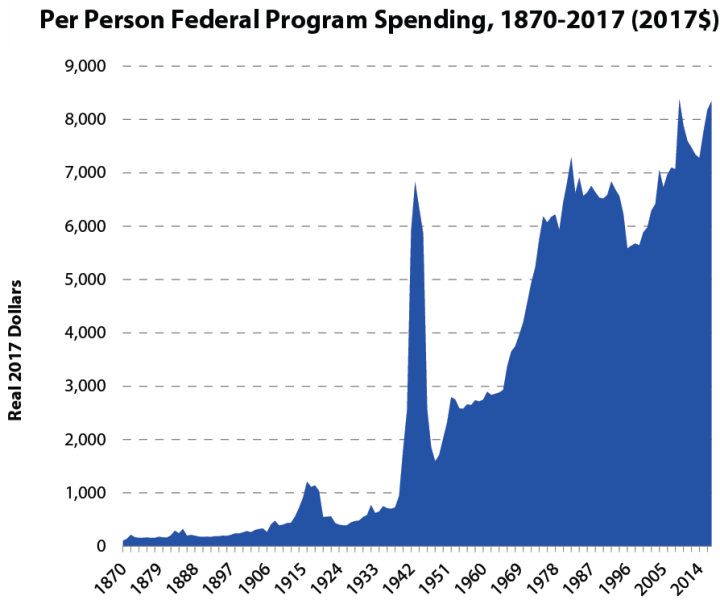